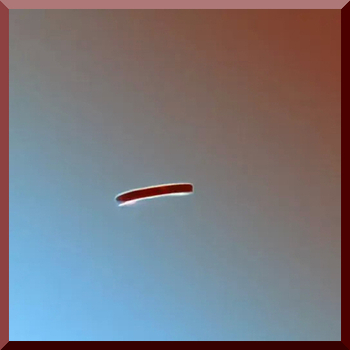 Miss M.I. Footner of Victoria, was walking her dog, when she saw a bright dot of light just over Little Saanich Mountain. The light grew larger and larger, until suddenly the object was above me and became stationary. The object was cigar shaped and about 100' in length.

On a summer evening, early in the 1960s, I heard the news that the Soviet sputnik might be seen in orbit crossing our hemisphere.

So I walked my Scotty dog, Cam, over to a field, where horses and colts were grazing, which Cam and I often visited.

As I stood there, I saw a bright dot of light just over Little Saanich Mountain by the astrophysical observatory. I thought, Here comes sputnik. I expected to see a flash like a meteorite cross the mountain, but to my amazement, it came slowly and grew larger and larger.

I did not take my eyes off it and began to think it might be the reflection of an airplane. Instantly, it was above me and became stationary, all silver shining in the late sun, with a number of twinkling lights along the side.

I thought again, is this a wingless plane, or dirigible? But there were no gondolas and not a sound. I expected it to continue on to the southwest but it veered at right angle and swiftly disappeared over the trees towards Finlayson Arm, and the Sooke mountains.

As I walked home, I wondered if anyone else had seen this strange object, though I realized many people were probably indoors at this time.

I had felt no fear at all. I had looked carefully at the bright shining lights like windows along the sides, but could see no faces or forms of any kind. The object had a soft glow about it, not like the metal appearance of our airplanes. Neither the horses nor my Scotty showed any fear, and no neighborhood dogs barked.

I estimated the craft, hovering just above the tallest trees, was about 100' in length and 25' to 30' in circumference. I later, learned that a friend who lived nearby, Miss Audrey Winderburn, had seen a craft of similar appearance while outside attending to her horse.