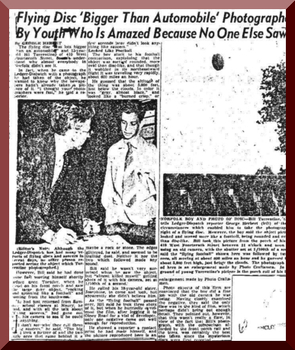 The flying disk was lots bigger then an automobile and 13 year old Bill Turrentine of 410 West 14th Street doesn't understand why almost everybody in Norfolk didn't see. In fact, when he came to the Norfolk Ledger-Dispatch with a photograph he had taken of the object, he wanted to know why the newspaper hadn't already taken a picture of it. I thought your photographers were fast, he told a reporter.

However, Bill said he had done some fast moving himself shortly between noon Tuesday, when he stood on his front porch and saw the large object, rocking and spinning like a football and coming from the southwest. He had just returned from Summer School classes at Maury, he said, and with all the talk about flying saucers, had gone out with his camera to see if he could see anything. I don't see why they call them "flying saucers," he said. "The big one I took a picture of and the two little ones that became behind it a few seconds later didn't look anything like saucers."

The boy stuck to his football comparison, explaining that the object was sort of rounded, more oval then disk-like, and though it wobbled in it's northeastward flight it was traveling rapidly, about 600 miles an hour. He guessed that the altitude of the thing was about 5000', just below the clouds. In color it was "gray, almost black," and looked like a "burned crisp," or maybe as rock or stone. The edges glittered, he said, and seemed to be trailing dust. Neither it nor the two which followed made any sound.

Bill said he wasn't very surprised when he saw the community, but "almost killed myself" getting shots of it with his camera, set at 1/100th of a second. He called his 18-year-old sister, Josephine, to come and look, but apparently she didn't believe him. As the "flying football" passed over, Bill said he took three shots of it, but when he hurriedly developed the film, after legging it to Olney Road for a vial of developer, only one negative came out well enough for reproduction.

He showed a reporter a contact print he had made himself, and the picture reproduced here is an enlargement made by Photo Craftsmen. Photo experts of this firm are convinced that the boy did a fine job with the old camera he was using. Having closely examined the negative, they said the only flaw was in the kind of film, which perhaps didn't bring out enough detail. They pointed out, that this wasn't really a flaw, in view of the fact that Bill's photograph, with the comparison afforded by the front porch rail and the trees, was certainly the best one taken since the mysterious disks were first reported