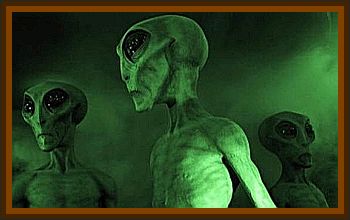 During his lifetime my father told me that he knew a lady who claimed to have been chased by little men.

Mrs. Maria Dion was 18 at the time and lived in Fontainebleau in the Eastern counties. She danced all night with friends. After the party, Maria walked back home. By an early night in the month of November 1918.

Small green creatures, no more than 2' tall began to chase her. The creatures ran very fast despite their size. She stated that these beings were dressed like our aquanaut helmet and overalls. At 18 Maria believed they were the devils who wanted to punish her for having danced without having told about it to her parents.

To me the observations that were, prior to 1947 belonged to the world of folklore elves and fairies. But now, I am inclined to take it more seriously.

A few months after writing the story of Mrs. Dion. A grown up woman contacted me to tell me that Maria Dion was her grandmother. She asked me how my father had known that woman. In the 1950s my father had been playing the accordion at a wedding. And this is where he met this lady who seemed to be aged late 50s or early 60s.

Who told that young people were lucky to dance without problem. In his time the village priest and their parents frowned upon the pleasures of dancing.

And that is where she told her bad adventure with these small aquanaut. The woman who claimed to be the granddaughter of Maria Dion also gave me some information on the small town of Fontainebleau the actual place of the event because I had written Fontainebleau in my first website.

The lady told me that she too had been witnessing the UFO phenomenon on several occasions and had foreseen well before the events of the UFO sightings. The members of her family and especially her husbands are witnesses of the events. She told that her hands were full of statics before each UFO encounter.

The woman was happy to see that she was not the only one to have experienced it in her family and it is thanks to your website that I know the strange story of my grandmother.