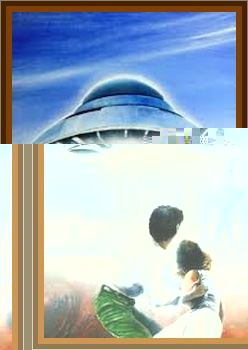 M. Luch Fontaine said that he was at the 13 mile mark on the plain called La Plaine des Cafres, on the Island of Reunion at 9:00 a.m., picking grass for his rabbits when he saw a sort of oval shaped object in a clearing about 80' away. The sides of it were dark blue in color while the middle was transparent and shaped somewhat like the windshield of a Peugeot 404. Above and below, it had what appeared to be two glass feet of shiny metal.

In the center of the object were two individuals wearing what appeared to be divers suits replete with helmet through which Fontaine could catch a glimpse of their faces. They were standing with their backs to Fontaine, but then one turned around and looked directly at Fontaine, while the other, to Fontaine's right, turned his head so that part of his face was visible through the faceplate of the helmet. The suits were segmented in appearance. Fontaine said that then both of the figures turned their backs to him and there was a flash, similar to that made by an arc welder’s torch, and everything went white around him. He felt a powerful heat and a blast of wind and a few seconds later, there was nothing where the craft had stood.

When he approached the spot where the object had been, he found no marks. He had estimated its diameter to be 13½' to 16' 8" and about 9' 4" from top to bottom.

He told his wife about it, then the police, and the next day, an enquiry began. At the scene, a certain degree of radioactivity in a radius of from 16' 8" to 20' from the presumed scene of the near landing and also on the clothing that Fontaine had worn, was detected.

Obviously, the object was not on the ground. The suits worn by the persons are not unusual in UFO files, nor was their size just short of 36", nor the shape of the machine. But the shiny feet, one above and one below are most unusual. These appendages were white, it seemed, and closely resembled the broad, circular pedestal sometimes used on some tables, particularly patio tables, and in this instance, the upper one being flat side up and the lower one flat side down.