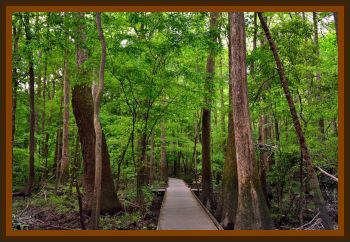 My family and I were staying at Twin Falls State Park one year and decided to hike one of the trails.

This trail was one where the state parks boundary meets someone’s private land.

We saw a barrel hanging from a tree approximately 200' off the trail and even a treehouse. After passing both the treehouse and the hanging barrel we stopped to get something to drink, and heard a huge crack of a tree branch behind us like someone or something stepped on it.

We continued on while whatever it was kept following us and stepping on tree branches and twigs along the way. Finally whatever it was stopped and we didn’t hear anything after that.

I don’t think I’ll ever forget it. No human being would make that much noise if they were following us. A lot of people may say it was a bear but I’m not so sure.