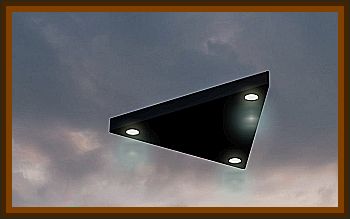 I saw one of these in Follansbee, WV. It was hovering just above the hillside at 4:30 a.m.

I was directly under it and had an awesome veiw. I wish I had a camera. It was huge.

Jet black and had an arrow shape. Bowed in on back. 4 tiny red lights on the botton that hung down like balls. Although it was trianglular in shape it was not the triangle craft with the pointed sides. they were more rounded.

We parked under it along the road, and watched it about 10 minutes. It was absolutely silent.

These were the bightest whitest lights I have ever seen.

We took off the go on top of the hill at the graveyard where it was. It only took us a couple of minutes to get there. There is a full view of the sky. When we got up on top. I was nowhere in site.

Coming down the highway Rt. #2, it looked like a plane coming straight at us. We are close to Pittsburgh, PA airport just 40 minutes away.

This was not in a flight path and it hovered about 30' from the top of the hill. As we got closer coming down the road.

I realized that was not a plane. I was close enough, I could have shot it with a bb gun.

The craft was beautiful. It was thick, like it had stories. like a house. It was so large I could not begin to give you an accurate measurement.

If you go to you tube video:

Market St. Bridge, Steubenville, Ohio. It’s not long. The hillside we saw it on is on that video, just to the right as they are crossing the bridge. The UFO is not in that video. It’s not my video. But you will see how close we were to it.

Also, Dr. Jack Ripper has a good video of these crafts. it’s called:

Stange Lights UFO is another video by Squallis.

There is also a mill across the road from the hillside that has a huge gas flame. The flame lights up the night brightly almost like daylight in that area. This gave us an excellent view of the craft.

There were no visable seams. or openings for landing gear.

I am finding more videos of this online. Really want to know what this is. I regret not having a camera.