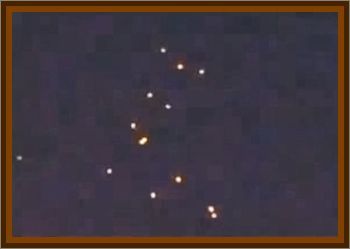 More than 20 UFOs are seen and detected by radar in various parts of the country. Colonel Ozires Silva, former president of Embraer Petrobras, and the pilot saw and pursued unidentified objects for about 25 minutes. The incident was covered widely in the Brazilian media, leading to a press conference at the Ministry of Aeronautics in Brasilia on May 23, with air traffic controllers and air force pilots involved in the scramble mission. He later declares, that the lights were primary targets in the radar, positive targets, a concrete thing. 2 Northrop F-5E's & 3 Mirage III's are sent to intercept the UFOs, but the objects disappeared from sight and radar detection. In the aftermath, the Minister of Aeronautics, Brigadier Otávio Júlio Moreira Lima, publicly declared:

Between 6:30 p.m. and 1:00 a.m. at least 21 objects have been detected by Brazilian radars. We can only give technical explanations and we do not have them. It’s fantastic, the signals were very clear.

Aeronautics Commission report was not released. However, the accounts of air force pilots and radar controllers were published widely in the press and later studied by Brazilian researchers. A comprehensive report was made by Basílio Baranoff, an airline captain, member of the Aerospace Technical Center, and consultant for the Brazilian UFO organization CBPDV. Baranoff provided a chronology of events for the night of May 19, 1986:

7:00 p.m.: The control towers in São Paulo and Brasilia confirm to São José that they have three primary targets on their screens, and that there are no scheduled aircraft in those areas.

8:30 p.m.: A new object is observed with binoculars at the São José tower, it shows defined edges and red-orange color, it approaches the tower and then retreats.

9:10 p.m.: The Xingu turbo-prop returns for landing when a new, large luminous object heads toward the aircraft. The São Paulo tower confirms two echoes: the Xingu and an unknown, which disappears from the screen 15 minutes later.

9:25 p.m.: The Xingu returns for a 2nd landing attempt when the São Paulo tower reports yet another object at 180° south, which is observed and followed by Commander Pereira.

9:30 p.m.: The Xingu returns for a 3rd landing attempt when ACC-BR reports the appearance of new objects. The Xingu, now at 10,000' of altitude, makes visual contact with 3 luminous objects flying low over Petrobrás refineries and heading towards Serra do Mar. The Xingu finally lands in São José dos Campos.

9:50 p.m.: A luminous yellow object surrounded by smaller lights is observed at 110° azimuth.

10:55 p.m.: Anápolis AFB detects the objects on radar. The Mirage piloted by Captain Viriato does not make visual contact with the UFO, but a target is detected on its onboard radar. Captain Viriato later explained at the press conference in Brasilia that he was chasing the UFO at 850 MPH, approaching the object up to a distance of 6 miles. The object was heading up front and zig zagging on my radar scope. Suddenly, the blip disappeared from my radar scope.

I had one visual contact and one contact with my aircraft radar of something that looked like a luminous point, which was 12 miles in front of me, a distance confirmed by ground radar. The object was moving from left to right and then began to climb, it was at 6 miles of altitude and flying over 600 MPH, I followed it up to 200 miles over the Atlantic Ocean, limit of Brazil's territorial waters. I wasn't afraid because I like the unknown.

Near to São José dos Campos, radar detected several targets, 10 to 13 targets, at a distance of 20 miles. The sky was clear but I didn't see anything. Ground radar informed me that the objects were closing in: 20 miles, 15, 10, 5, suddenly there were 13 objects behind my aircraft, 6 on one side and 7 on the other, during several minutes. After I maneuvered the aircraft, the objects had disappeared.

These are the basic known facts surrounding the multiple UFO jet scramble incidents over southeastern Brazil on the night of May 19 & 20, 1986. It is noteworthy that Captain Baranoff added that:

Two nights after, 10-11 unidentified luminous objects returned for a new round over São José dos Campos, they were observed visually and detected by the São Paulo, ACC-BR and by CINDACTA 1 radars.

This time there was no official confirmation from Air Force authorities. Lacking the final Ministry Commission report with all the pertinent data, it is difficult to make a final conclusion about this case. Many hypotheses were offered in the Brazilian media by skeptical astronomers and scientists, ranging from a meteor shower, a reflection of the full moon and ball lightning, to radar malfunction, space debris and spy planes. Most of these explanations seem quite insufficient to explain the events of May 19. One of the more plausible was offered by British space researcher Geoffrey Perry. According to Perry, the Soviet space station Salyut 7 ejected several boxes of debris on that night, which re-entered the Earths atmosphere around central-western Brazil. The re-entry of NASAs Solarwind satellite was also discussed in the Brazilian press. However, Brigadier José Cavalcanti from Brazils Air Defense Command, was not impressed with the Salyut 7 and Solarwind explanations. He told the weekly magazine Veja:

It could have been space debris, but it wasn't only that. A metallic box with space debris can be detected by radar, but it will always fall in the same direction and at constant velocity. That was not the case of what was seen in Brazil, where the objects detected by radar had speeds that varied from very slow to extremely high.