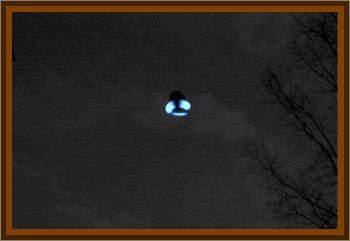 Just before 4:00 a.m., Patrolman Luis Delgado, frantically radioed his dispatcher, that a light had begun following him after he steered his cruiser down a dark street alongside a citrus grove. He requested assistance. Delgado said he noticed a rapidly descending bright green light in his rearview mirror. Seconds later the interior of the cruiser lit up as the light moved to his right and began to pace the car at about 40 mph, When he slowed his patrol car, the light maneuvered in front of him. Though it was so brilliant he had to squint, what he saw behind the glow shocked him. It appeared to be a metallic dome shaped object, about 15' wide, hovering over the road. Delgado pulled his car over to a stop and as he did its engine, lights, and radio all died. The object continued to silently hover about 10' off the pavement and 20' in front of his vehicle. Delgado got out of his car and began stepping backward down the street, feeling panic. He noticed that his breath fogged as if it was a cold morning, yet the temperature was 60°.

The object departed silently, and Delgado returned to his patrol car where, the ignition, lights, and radio all started up again without his assistance. At 3:56 a.m., four minutes after Delgado made his distress call, 3 patrol cars arrived. Sergeant H.L. Bartley found Delgado sitting in his cruiser with the door open. He was shaking. Later that morning Delgado underwent both a physical and a psychological examination, neither of which found any evidence of injury or mental abnormality. Sgt. Bartley, now retired from the force, vouches for Delgado's credibility, I don't doubt he saw something strange out there that morning. Many years after the incident, Delgado, who did not speak to the media until 1999, thinks every day about what happened to him. It's still so vivid in my mind. It was the strangest experience of my life.