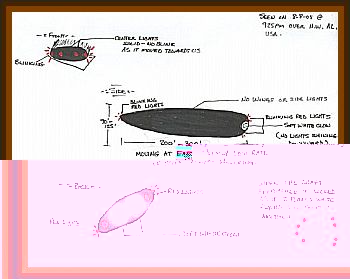 Tonight I witnessed a UFO over my home with 4 others.

The object reported August 3, 2005 of an object high over high southern California, is almost exactly what we saw about 2½ hours ago.

The way he describes it, it fits our sighting, with a few exceptions. The object was moving from east to west very slowly. At first, we thought it was 2 planes flying one in front of the other, but as it approached we noticed it had no wings.

We then thought it was a blimp until it was just north of us and noticed it’s size. Although we couldn’t see an exact outline we knew it was very long as we watched the stars disappear from the sky as it passed between the lights. The craft we estimate to be as long as an aircraft carrier and was making no noise except for a very low hum.

From the time we first saw it we watched it for about 2 minutes before slowly gliding out of sight.