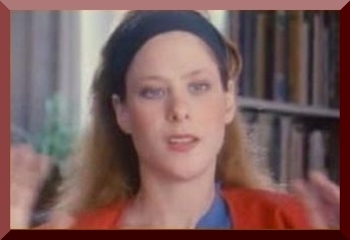 New York choreographer Kristina Florence claims that she has had numerous experiences of Missing Time and alien abduction.

Her story begins in the Mojave Desert in 1974, when she was seventeen and driving with her mother and sister to San Francisco. On the way there, their car overheated next to a park in Barstow, and their mother went to get water for the radiator.

My sister got out of the car and I heard her run around the back and all of a sudden she said:

And the next thing I remembered consciously was that we were lying on this blanket in the middle of the park as if we’d had a little nap, just lying there. Our mom was still not around.

And we woke up and we were like, whoa, what happened?

And then the next thing I remember, the three of us are just driving like hell.

We never talked about it until my sister just called me up one day and we sort of began to talk about it further, and realized that we’d both had this very bizarre memory of this missing time thing.

In 1986, she agreed to go under hypnosis to find more about what happened to her and her sister. Through hypnosis, she realized that aliens had abducted them and that they were examined by the aliens.

Under hypnosis, Kristina started having this picture of her sister getting out of the car and then Kristina got out of the car and looked up and there was something above the car. Kristina was so scared, she didn't know what it was. She was trying to start the car but it wouldn’t start. Then the next memory that she had under the hypnosis was that she was on a table and there were some aliens around.

There was this screen, it was about as wide as a large television screen but it was paper thin and it was just moving around the table and it wasn’t attached to anything. Kristina could see three dimensional shapes of her skull and her entire body. It was just taking pictures. And it was just this huge spherical room that was just covered with dials, there wasn’t space. It was just dials. And Kristina felt like they put like these rubber pants on me, or something with things attached. And then they left the room. And she lay there and was asking for her sister, and somebody was telling Kristina her sister is okay, she’s alright.

That’s the last thing Kristina remembered. Then they were back on the grass.

Kristina's story is somewhat similar to that of Robert Matthews, who believes that he was abducted by aliens during a period of Missing Time in 1966.

One psychologist, is certain that Kristina is legitimate and that her story is completely true.