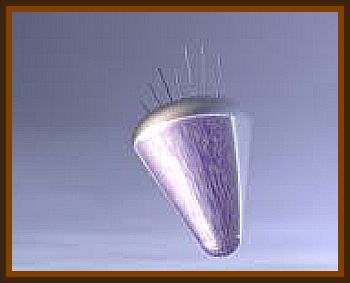 A man who was watching television observes outside an orange light appearance moving to and from.

While approaching, the witness observes a luminous conical cone shaped, form turning around its axis and comprising on its circumference stripes of various colors… The witness then feels muscular contractions in his legs and the bottom of his back.

The form remains stationary and moves away suddenly very quickly to become one luminous point before returning gently towards the house. The witness, with the impression of feeling observed, by the object, feels fear and hides under the covers in his dark room. The phenomenon is still there, the witness then hears a noise on the ground outside and perceives several flashes.

At this time his small dog also takes fear and takes refuge under the cover.

The whole of the observation lasted several minutes, the episode of the room itself being estimated at 3 to 4 minutes. The witness was very shocked by his experience, which did not receive any explanation.