Formation Of Lights Over Springdale/Fayetteville - 2 Stories 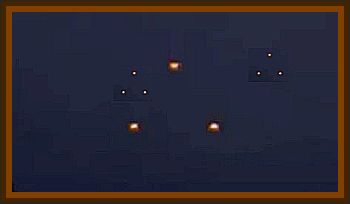 Concerning a Formation Of Lights Over Springdale/Fayetteville during the summer of 1960 or 1961.

Just about 5 miles southeast of Springdale, there is an old church or school house called Fishback. One summer night a couple of friends and myself were attending a get together of local singers and guitar players in that old building.

A couple of guys came in and said that there were some strange lights to the west. We all trooped outside and sure enough, there over Springdale was a huge formation of red lights forming a geometric pattern. These lights seemed to be going in and out of each other in triangular patterns. We jumped into my car and sped northwest toward Springdale to get a closer look.

After traveling about a ¼ mile down the road we noticed that the lights were now moving slowly south toward Fayetteville. I pulled over to turn my car around and got stuck in the ditch. So we watched as this strange procession slowly dissapeared in the haze of Fayetteville's lights.

I was about 16 and this is one of two sightings I had in Arkansas.

I am guessing at the date, It's been almost 40 years ago.

Some friends and myself were at a small little country church where a few local singers and guitar players were meeting for an informal get together.

Someone came in and told us about some lights over Springdale, about 3 miles west of us.

We all went outside and there they were. It appeared to be a large formation of red lights over Springdale. These lights were in triangular patterns.

The lights were stationary except for some more lights coming out of those and forming more triangles.

We jumped in my car and started to go to Springdale for a closer look when the formation started slowly moving south toward Fayetteville about 5 miles from Springdale. We watched until they became too dim to see in the city haze.