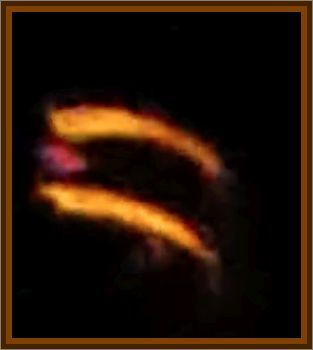 We came home from my aunt and uncle and there was no other vehicle around.

When I saw it, I told my parents to stop the car and shut the lights off. I felt instinctivily it was what we had to do.

We watched the objects flowing over the small mountain range for maybe 3 or 4 minutes. It was absolutely silent.

They were quite distant, but anyway, the winter night and cold had brought sound if there were any. Since these weren't any fantasy objects, and no outraging things beyond this happend, I believe it is a trustworthy sight, and not some exagerated nonsens.

No big deal, but we saw them. They were not aviation or other. Just three UFOs, that's that. No sound, clear winter cold sky. Inline type formation, firetails which started somewhere in the midle of the crafts could have been from a jet, but it wasn't.

The speed of diseapearance was to fast, and they just went straight up to the universe in a faster than eye flash.

Well, it was not a special thing beside of I saw what I saw, and can't deny the fact, but we was a little stunned I remember. I wonder if there were more sightings in Norway that time around that area, close to the Swedish border, about two hours drive from Oslo,pretty deserted at that time, forests.

I do not believe in anything before I see it, and I saw it. The crafts moved from the right to the left in the night sky, and all held the same tempo. They also vertically went straight up in the same formation, but this time the first one at the first, and the next one, and the next, like a neckless. It looked like they took of upwards without changing the horizontal position of the crafts, like that modern air force jet which can lift veritcal stright up. The crafts were never landing, just flying, lowing, and then vanish.

I am sure no planes ever have been built to have that speed of acceleration in just less than a second, then or now. Well, this isn't a big record to remember, but I thought I just mention it. I am a sceptic so I really never speak much about such things, but I know we are not alone anyway. Any intelligent non arrogant person should understand that. The color was light yellow glowing like any distant light for instance from a strong light and not changing, so was the fire tails but you could clearly see what was the firetails, since the object moved. I dont know if to call it disk, or oval horizontal eggshapes, pancaces whatever.