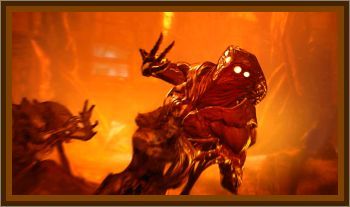 The 19 year old witness had fallen asleep that night when he was suddenly awakened by his mother’s dog. The dog was growling and shaking and staring at the bedroom door. The witness got out of bed and went to check and see what the dog was growling at.

Going out into the hallway he heard a noise in the den area. Hoping to confront the intruder the witness put on a pair of jeans and snuck into the den. Once inside he did not see anything, he checked his parents room and nothing either. He also checked the kitchen and headed back to the den, the dog still growling, and following him.

Then the hairs on the back of his neck stood up, turning around he saw a figure resembling a human. The witness decided to attack the figure. He came to the next day around noon. He had been stuffed under the kitchen counter, he was naked, his nose was bloody, and he felt sick and disoriented.

The dog was hiding under the couch in the den refusing to come out.

He woke up suddenly at nighttime, naked again and the nose bleeding again.

He looked over to the front door of the house and saw a 7' tall figure that looked very muscular, but incredibly, it looked like if it was on fire. It glowed as if it were a bright hot coal in a furnace. Its back was to the witness when he first saw it. It turned around as if it was checking on the witness.

The witness was apparently paralyzed and was unable to move. The strange being came over to him and put its hands on his chest. Strangely the witness did not feel any heat or fire. But he felt as it had been hit on the chest point blank by a shotgun blast. He also felt a great deal of some type of energy emanating from the creature.

The witness felt his skin vibrating and so was the couch.

The creature touched the dog and it fell over.

The witness then heard a telepathic message in his head, which said:

The witness attempted to get up but was told to go to sleep.

The next day he woke up around 3:00 p.m., feeling very tired and weak and could not eat. He fell asleep again and was sick for a few days after that. The creature had disappeared.

He described it as 7' tall, heavyset, and radiated some type of energy. It had stripes on it. He could not remember what the face looked like.