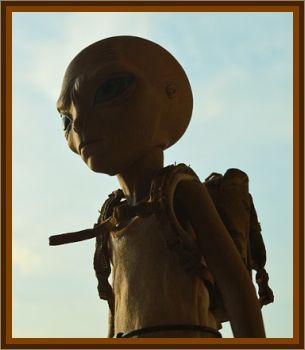 Shortly after 8:00 p.m. on 2nd February 1971, Sinikka Kuittinen & her friend, known only as Mrs. Manninen, were driving towards Oulu in the Kiiminki region of Finland. As they did so, each had noticed a strange light behind them in the night sky. As they continued to watch, the light rushed towards their moving vehicle. It then proceeded to keep pace with them, cruising along on their left hand side.

They would bring the car to a stop near a field at the side of the road, and the light vanished.

In its place, however, was a strange, 3' tall creature. It adorned a helmet and a brown/green suit. The strange creature crossed the road in front of them and disappeared into the woodlands opposite the field.

Not wanting to stay, Kuittinen slammed her foot down on the gas pedal and didn’t remove it until they reached their destination of Oulu.

Neither of the women would report the incident initially. Not until the apparent encounter, in the same region, on February 5th that is.