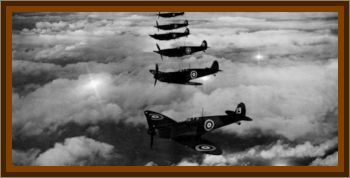 General Douglas MacArthur sent in a task force of 150 men to prepare the way for his main body of troops. On August 28, they landed at Atsugi airfield, near the city of Yokohama, under the command of Colonel Charles Tench, who was the first American officer to set foot on Japanese soil. For the first wave of men flying into Atsugi, it was a historical moment, shared in spirit by all the American forces. But as the task force approached, something occurred that was not on the agenda.

In broad daylight, Colonel Tench's men were flying towards Japan. As a member of the first troops into Japan, Sergeant Leonard Stringfield was packed in a C-46, number 304. On board was special equipment, that he and nine others with the Fifth Air Force intelligence team were bringing with them. Their flight plan was depart le Shima, make a short stop at Iwo Jima, and then fly on to the Atsugi Air Field on the island of Honshu, Japan.

They were flying at 10,000', between the Japanese islands of le Shima and Iwo Jima, when their C-46 suddenly developed trouble in the left engine. Suddenly, the plane dipped, and the engine struggled to keep working. It sputtered oil and the C-46 began to lose altitude, dropping approximately 25-50 feet. It was at this moment that Stringfield saw something that completely caught him by surprise. Looking out his starboard side window, he was shocked to see three teardrop shaped objects. Looking carefully, he determined that the three unidentifiable blobs were about the size of a dime held at arm's length. They were brilliant white, like burning magnesium.

Flying in a tight formation, the objects were traveling in a straight line through drifts of clouds, seemingly parallel to the C-46 and equal to its speed. Stringfield became alarmed; they seemed to be intelligently controlled. He was convinced they were not U.S. aircraft reflecting the sun. In fact, they were like no aircraft he had ever seen. They were extremely advanced; Stringfield saw no wings or fuselage, and there was no outline of a solid object behind the mass of luminescence. Being familiar with the latest intelligence reports and summaries describing the shape and characteristics of Germany s jets and the Japanese Bakas, he was quite sure they were not enemy jets.

Suddenly, Sergeant Stringfield's attention was roused by a commotion coming from the cockpit. Seconds later, the alarmed co-pilot made his way back to where Stringfield and the rest of the men were sitting. Looking at everyone, he said, We're in trouble, and then handed Harry Berning a pair of binoculars to help him find a place to land. Berning was plenty scared.The plane was going off course and they were flying through heavy clouds. Stringfield was on the plane's left side and Berning was on its right, so Berning was unaware of the objects.

Sergeant Stringfield continued to watch. Whatever they were, he was sure they were responsible for the plane's behavior. The entire event lasted about thirty seconds before the three objects disappeared into a cloud bank. When they pulled away, the C-46's engine revved up and returned to normal again. The plane immediately began to gain altitude. Whether coincidentally or not, the C-46 fully recovered from its engine problem and was able to safely arrive at Iwo Jima without further incident.

During the trip's final leg, Sergeant Stringfield watched the clouds closely, waiting to catch another glimpse of the objects, should they return. They did not. Getting off the plane, Stringfield wanted to report the sighting, but Iwo Jima was a bustling staging area and there was no real place to report anything of that nature.

The flight crew was off somewhere getting briefed, so Stringfield was unable to question the pilots. With no time to waste, he and the rest of his team immediately conducted a major check-up of their C-46. This was when he noticed that oil had splashed all over the side of the craft from the left engine. Other than that mess, there were no other apparent problems with their plane, and they were soon on their way.

A couple hours later, Stringfield and the rest of the first echelon Air Intelligence members arrived at the Atsugi Air Drome. Again, there was no time to waste. Preparation for the arrival of the second and third echelons of the intelligence mission was a priority. Unfortunately, by the time Stringfield had a few minutes rest, it was too late. The pilots were long gone, whisked away to debriefing, so he was unable to corroborate anything he had witnessed. Stringfield learned he was the only person in the rear of the plane who saw the strange objects, but he believed the pilot saw them as well. They were both on the same side of the aircraft. lie felt the pilot must have seen something, especially when the engine started experiencing trouble.

Sergeant Stringfield thought that after the pilots were debriefed, the S-2s would interrogate him and the other team members about the objects, but that never happened. So, he never filed an official report. Though he was unable to catch up with the pilots, he was sure they had reported the objects. Much later, another source told him that the magnetic navigation instrument needles in the cockpit went wild.

StringfiekTs foo fighter sighting is remarkable in many ways. First of all, the Fifth Air Force had established complete air superiority in the area. There was no way that the Far East Air Forces were going to allow a formation of advanced Japanese aircraft to operate near this intelligence mission. If the three objects were Japanese aircraft, were somehow lucky enough to get off the ground, and then managed to fly over the lone stretch of open water between le Shima and Iwo Jima, their mission had proven futile. If it was a last ditch effort to strike a U.S. warplane, the Japanese pilots had passed on a golden opportunity to attack Stringfield's defenseless.