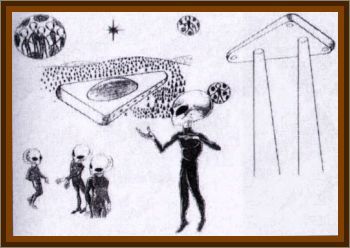 On the evening of September 23, 1996, in Fife, Scotland, two women and a child would witness out of this world events following a last minute trip to the shops for coffee.

Mary Morrison (pseudonym), her visiting friend Jane, and Mary’s son Peter set off at a little after 8:00 p.m. As they drove along the road, they witnessed a strange, bright light which seemed to split in two. As they watched from the car, a huge, triangular craft with red lights on its underside passed overhead.

It soon disappeared from sight.

Perplexed and shocked, they continued on to the shop.

On the return journey, however, they saw the strange craft again. This time, it came extremely close to their car, hovering overhead for several seconds.

After returning home, Mary reported the incident, and then the three of them, along with Mary’s daughter Susan, headed back out at the UFO investigator’s request to see if they could spot anything more of interest. As they approached the place where they had seen the strange craft, each could see an illuminated area at the edge of a field ahead. They stopped the car and positioned themselves behind a wall in order to watch events a little more closely.

They could clearly see several thin figures moving back and forth to a huge object on the ground. Each of the figures seemed to be carrying a cube or a box.

They would return to the scene a fourth time, this time with binoculars. As they watched the entities that were clearly not human, a cocoon shaped capsule raced toward their location. Although it is not entirely clear what happened following this, initial hypnotic regression would suggest an abduction incident took place before the four people were returned to their car, which is their next clear memory following the capsule’s arrival. The incident remains unexplained.