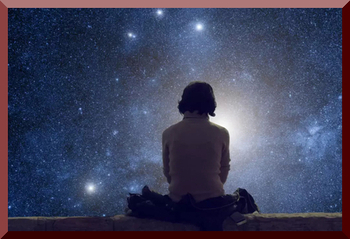 Paolo Fernandes was meditating alone on a small mountain plateau outside of the city when he sees a bright flash of light behind a nearby hill. He trembles with excitement and his heart starts beating fast, he also feels afraid.

He then hears a voice in his head:

Don’t fear, we are your friends.

He relaxed as tears of joy streamed down over his cheeks.

With trembling legs Paolo runs over to the hill, as he climbs over a dune he sees an enormous spaceship floating just above the ground. He hears the voice in his head again:

Do not approach the ship, you must remain where you are, otherwise the magnetic field around the ship will hurt you.

The object is metallic and disk shaped, surrounded with an aura of light, is as large as three airplanes put together. There appears to be a strong smell of ozone in the air. Then a bluish beam of light shoots out from the object and strikes Paolo. An eerie calmness overwhelms him at this time.

A kind of loading ramp comes out of the object. A powerful white light shines out from the opening on the craft. Two men step out of the opening, and stop one on each side of the ramp. The men are described as tall, slim, with long blond hair and dressed in a kind of fluorescent overalls. The light becomes even brighter and a third person appears, the guards stand with crossed arms. The third figure appears to be the commander and has a majestic attitude; with each step he takes silver rain seems to cover the ramp. His face is extremely handsome, with shiny eyes and light radiating from his head. On his chest he carries an insignia resembling several sparkling multi colored stars. When he arrives at the end of the ramp, he puts his right hand flat on the forehead and the left on the chest.

Stunned, Paolo falls to his knees. The alien commander then says:

My name is Ashtar and I greet you, child of the stars. Convey this message to the humans: Awake from your inertia and make the world shine in its brightest light.

He finishes the message conveying a message of love and hope, and then walks back inside the hovering disk along with his two guards. The object then shoots up and disappears into the sky.