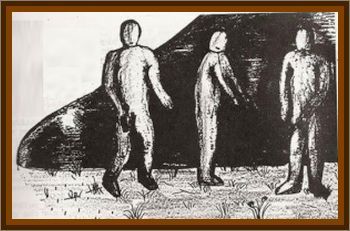 Michel Fekete, a 29 year old Hungarian World War refugee, was a railroad worker in 1957 and was riding his bicycle home on the Miraumont-Beaucourt road at 10:45 p.m. As he rounded a bend in the road, he was blinded by a big, powerful light on the road, around which he saw 4 silhouettes of human shaped beings less than 5' tall, who seemed to be barring the road.

Fekete, thinking he was being ambushed, dismounted from his bicycle and ran off the road where he hid behind an electrical transformer installation. From there, he found the footpath to the home of friends, Mr and Mrs. Rene Lepot. The Lepots and some friends, Mr. and Mrs. Rene Iklef, were in the kitchen when Fekete arrived at the Lepot home. When they let him in, he was almost incoherent with fright but managed to gasp out the word attacked!

He pointed out the window to the road, a scant 50 yards away. The Lepots turned out the lights and the 5 of them went to the window and looked out.

They all saw quite clearly a luminous object, pulsating in color between red and white. Also viewed in the light of the object were three silhouettes of men between 4' & 5' in height who were visible from the thighs up. The lower extremities were hidden by the road bank. The color of their clothing appeared to be a grayish beige except for their huge heads which were darker in color, nearly black. No features could be distinguished, however. The three were moving about the road and the adjacent field with a tottering gait.

The 5 witnesses watched the scene for about 20 minutes, when another railroad worker, Mr. Demanchaux, joined them. After a while, a car approached and the object’s light went out. In the light of the car’s headlights, however, the figures were still visible. The 6 witnesses thought the driver must have seen them also. When the car had gone, the white light reappeared, less brilliant than before, just above the road.

It rose rapidly and silently into the sky at a 45° angle toward the northeast and by 11:15, it was completely out of sight.

Investigation of the spot where the object had sat revealed a 15' circle of apparently freshly deposited matter which was identified as asphalt. It was also found that the iron fence posts along the road were strongly magnetic, but all were equally so, and no specific significance was attributed to it. No one was able to furnish an explanation as to why the object had dropped the asphalt, if indeed it had.