I Thought UFO Was A Car 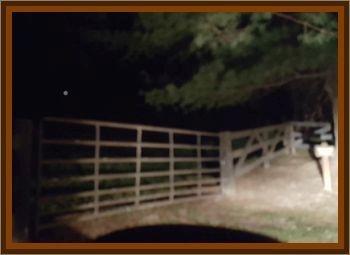 My name is Johan Reitman, and I farm near Feathersdorp, 93 miles from Harare. I am 31 years old. On February 5, 1996 I woke up from a bad dream just after midnight, when I heard a car go past. I got up and looked out of the bedroom window, which faces the front of the farm.

I watched as two cars passed each other, a strange sight, as there are usually few vehicles to be seen, and none at night.

One car pulled into my gate and I thought immediately: Oh no. those guys are coming to pinch my new engine on the borehole, well.

I rubbed my eyes and face to make sure I wasn't still asleep, and I looked at the car again. It was long and wide and made a low humming sound. I could see lights at the back, a row of red lights, and a front light which shone high enough to illuminate the tree tops. This car, or object, stopped at my gate for a good 30 seconds and then drove on, as if the gate had been opened.

And that was it - it was gone.

I took my torch, my rifle, four farm workers and my dogs, and we went out to the gate. Despite the fact it had just rained, there were no tire tracks or human tracks on the road. As we approached the gate, I could feel heat coming up from the surface of the road, a really oppressive heat radiating from the ground. Even my ears felt flushed with the heat and my workers and I were soaked with perspiration. It was about 12:30 a.m. by now, so when we found nothing further we all went back home.

It was only the following morning that it occurred to me that when we reached the gate, it was closed. This meant the car had disappeared through a closed gate, because I had been watching it when it disappeared and the gate hadn't moved.

The next day I sent one of the farm workers to fetch some sheep who were lost in the bush, and on his way back he said he saw an object straddling the road. By the time he reached the spot, it was gone, but strangely enough, the sheep would not walk over the area where the object had been. Instead, they divided around it.

My workers were convinced this was a ghost, and because I am a Christian myself, I believe it was a phantom or spiritual phenomenon of some sort. I don't believe in UFOs.