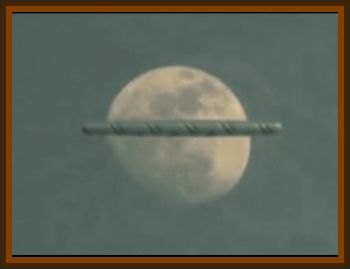 I was 15 years old at the time of this sighting.

I had returned by bus to our family farm from Knoxville, TN. The bus let me off on Kingston Pike. I had to walk along a paved road and then along our ¼ mile driveway. The time was early evening and the area was pasture such that the view of the sky was clear.

After walking a moment, I noticed that a cigar shaped object was floating in the sky. It was fairly far away but appeared to be huge.

I was walking East and the object was to my South over what I estimate was Fort Loudon Lake. At first I thought it must be a blimp, there were no glowing lights or windows: just a cigar shape with a prominent tailfin outlined by a red glow. The red light falling on the tailfin appeared to come from above and to the front of the craft, also a red light was glowing on the bottom.

I watched it with growing interest as I walked towards my house as the craft very slowly drifted foreward and downward. When I reached the house I rushed in to get my step Uncle and a camera. When we went back outside the object was gone.

The next day we called McGee Tyson airport and they said there had been no blimps in the area for over 3 years.