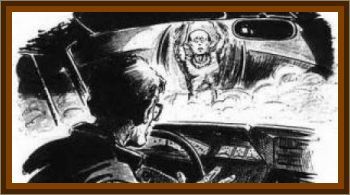 William Bosak, 68, had what he termed as a hair raising experience at 10:30 p.m. Mr. Bosak had attended a Fanner's Co-op meeting in Frederic and was driving to his rural home southeast of Frederic when, about one mile from his farm, he spotted an object on the left side of the road ahead of him. He had been driving slowly because of patches of fog and his headlights reflected off the object so he slowed as he approached it.

It had a curved front of glass and inside I could see a figure with its arms raised above its head, he told reporters. When later interviewed by Field Investigator Everett E. Lightner, Bosak said that the newspaper account which appeared in the St. Paul Pioneer-Press was basically accurate except that the ears on the human he saw inside were placed higher on the head.

The object was standing still and appeared to be between 8' - 10'high. The transparent 'glass' area through which he could view the occupant was bullet-shaped at the top, or tapered to a peak. He had slowed nearly to a stop when he came up to the object, but then fear took over and he stepped on the accelerator and left the object behind. He said that when he did so, the inside of his car became dark and he heard a swishing sound like branches of a tree brushing against the car.

The human, as Bosak referred to it, had hair sticking out from the sides of its head with ears protruding out about 3" and they were shaped like a calf's ear. It had no collar or shirt with seam in front but appeared to be clothed in something tannish brown in color and skin tight like a diver's suit. Both arms were extended above its head and hair stuck out from the outside of the arms. There was no beard, but there was hair or fur on the upper part of the body. The rest of it, from the waist down, was not visible because of the fog. The object itself was not lighted, but reflected light from the headlights of Mr. Bosak's car.

Bosak returned to the location the next morning to search for any landing marks or evidence of its presence but found nothing. He said he was very frightened at the time but the look on the face of the occupant of the craft indicated that it was frightened too. Its eyes were very large and protruding.

Bosak kept the experience to himself for nearly a month, not even telling his wife and son but finally decided to divulge the incident. Later that night, attempt to view the area where the incident had occurred from the vantage point of his house was unsuccessful due to the fog. I was so goldarned scared I was afraid to go out at night for a few days, he told reporters later, and said he wished that he had had somebody with him in the car at the time. After reflecting on the experience for a few weeks, Bosak said that he felt he did the wrong thing by speeding away from the object and should have stopped and tried to show it I was friendly. I wish I could meet up with it again.

Bosak, who has operated a 450-acre dairy farm east of Frederic for the past 40 years, said that prior to his frightening experience in December he had been skeptical of stories about UFOs. And I'm sure a lot of people are going to be skeptical after hearing what happened to me. But if people don't believe me, I'll take a lie detector test to prove this isn't just something I made up.

Mr. Lightner, who investigated the case, found Bosak to be sincere and a man with a good reputation in his community.