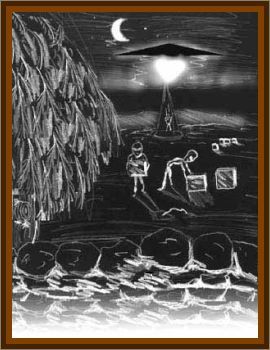 13 year old deaf mute, William Ortiz was riding his horse on a gravel road in his parent's property when peering through the growth of vegetation on one side of the road, he noticed a child like figure, but continued on his way. Then in an opening through the brush and in top of a large rock, he saw a disk shaped object with little figures around it. After staring at it he stopped in confusion, looked over his shoulder, and noticed one of the entities next to him. He noticed that the entity wore some type of uniform, very tight fitting and covering the neck and legs. He also wore boots. The collar ended like a turtleneck, and he could see something like a seam in the form of a V on the shoulders. The hands only had four fingers, he was not really so sure. The being had a large hairless head. The eyes were big, oval shaped and very black, some of the other crewmember's eyes were smaller than the others.

There were no ears, just a little hole on each side of the head; the nose was small as well as the lips, which never moved. The skin color was grayish brown. The entity closest to him appeared to be a male. The others looked the same.

The entity closest to him, looked directly into Ortiz's eyes and started sending him messages and at the same time using hand signals or language. Eight enigmatic words were given by the entity, which included “sky” “love” & “secret.” After the message, the entity made a turn toward the rock. At this moment Ortiz could not see the rest of the crew. The entity went back to the object half walking, half floating, very fast.

Then the object went straight up, made a turn to the southwest, and disappeared into the horizon. The rock on which the object rested has many peculiar symbols carved on it that included lines, circles, disk shapes, serpents and other symbols.