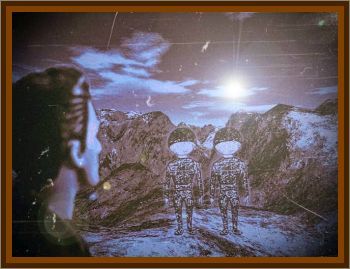 A family of four that included a 19 year old daughter and a 13 year old son had gone out to picnic in a rugged abandoned strip mine area. As they walked towards the nearby edge of the mining gorge, after parking their vehicle, they noticed a bright flash of light from behind a nearby hill, and then there was a loud sound resembling exploding firecrackers. The 13 year old hopped on his bicycle and began approaching the area. Being dangerous terrain, his father prevented him from going any further. Again the loud exploding sounds were heard. The family then arrived at the edge of the gorge and soon noticed two strangely dressed figures at the bottom of the gorge, who appeared to be digging or surveying the terrain. As they watched the two figures another bright flash of light emanated from behind a path directly above the figures.

As they approached the edge of the gorge, the figures suddenly turned around and stared at them. They noticed that the figures were wearing dull gray colored coveralls. They seemed to be wearing some sort of masks that prevented them from seeing any facial features. But the girl thought that their heads were somewhat larger than normal. Apparently startled by the sudden intrusion of the family, the beings began to leave the area using very quick and inhuman movements, one of them traversing a distance of 1000' in a matter of seconds. The other figure, using several vertical jumps of more than 100' each, climbed the rocky wall of the gorge. The two entities were now level with the family, and standing across the gorge about 600 yards away.

At this point the bright flashes behind the path increased in intensity and in numbers. The father then approached the edge of the gorge and saw more flashes at the bottom of the gorge. Suddenly two more similarly garbed beings appeared, these seem to glide about 20" above the ground and were carrying something very bright in their hands. These new figures stopped briefly and looked at the family, then followed the path, which the other humanoids had taken. Their bodies appear to give off bright flashes of light. Suddenly one of the figures, again using very quick movements, glided back down the bottom of the gorge and seemed to search for something, in seconds it returned back to join the others. At this point the family became hysterical, the mother feeling an intense pressure in her eardrums. The 2 younger members were screaming hysterically and all felt drained of energy.

Then a metallic gray oval shaped craft appeared behind the 4 humanoids, and descended to about 3' from the ground. The humanoids then disappeared into the object in an unknown manner, since no opening was seen. The family thought that the object must have been larger inside as to what appeared to be in the outside. The craft then suddenly flashed and shot away at angle disappearing at tremendous speed.