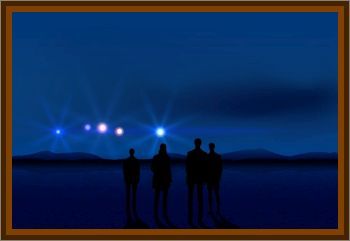 Two teenagers, one male & one female, were alone in their car near the Fallon Naval Air Station at 9:18 p.m. when they encountered odd lights in the sky to the east. Three boomerang-shaped objects were seen with 5 lights on each. The pair said that each object had one light at its center, one in the middle of each side, and one at each end. While they watched the objects, one of them separated from the group, shut off 3 of its 5 lights, and appeared as though it would land or crash. At this point, the pair decided to give chase. After driving 3½ miles, one of the objects moved closer to their vehicle, about 100 yards away and just 20' off of the ground, and began to pace their vehicle. And a 2nd object positioned itself behind them. At this point, they accelerated from 30 to 50 MPH, but the objects kept pace. The teens observed that the objects were about 50' across, but they could not estimate their thickness. They drove 5 more miles, stopping where the road came to a dead end. They turned their vehicle around at a dairy farms private drive, and stopped next to an irrigation canal.

The first object was now circling 50' above them, while the second object was still behind them at about 50' off of the ground. The female witness described the crafts main body as silvery, but when it banked and turned it appeared to be transparent and she could see the stars through the hull of the craft. Shaped almost like a horseshoe, having two rear ends with red glowing elements. The male witness used a million-candle spotlight from his truck to shine on the craft above, using his hand to shade the light back-and-forth to produce a signal. The object overhead then responded by descending from 50' to 20' above them. At this point, the pair has a lost time period. Their next recollection for both of them was driving home, where the male witness recalled that he looked into the rear view mirror and noticed that one of the objects was a considerable distance behind them, and then it disappeared. They stated that they had been parked near the irrigation canal for only about 5 minutes, but after they worked through the time sequence with investigators, it appears they were at that location for as long as 80 minutes.

One odd event at the scene involved a broken iPod in the vehicle. During the event, the unit began playing music, but after the event, they realized it was back to its original and broken state. Additionally, they reported that there were no sounds during the incident coming from any of the nearby farm animals. And no insects were seen or heard during the event. During a demonstration with investigators at the scene, moths could be seen near the spotlight and flying insects were seen above and near the canal water.

Both witnesses arrived at their Fallon homes at 11:00 p.m. and reported the encounter to their parents. The male witness returned to the scene about an hour later with his father. At this time they were able to observe the area being combed by helicopters and black SUVs with dark windows and apparently military personnel with flashlights walking the area. The helicopters were using spotlights to search the ground from the air. They decided not to approach the group.

The Public Affairs duty officer at Fallon Naval Air Station on May 14, 2009, confirmed an unspecified aircraft incident on May 7, 2009, between midnight and 1:00 a.m. Fallon is primarily an agricultural community and is the county seat in Churchill County in western Nevada with a population of 7,536. While the area is arid, there are 50,000 acres of irrigated farmland where the principal crop is alfalfa. Route 50 is the main road in town and Fallon is the western most city in the Loneliest Road in America, a stretch of Route 50 famed for its remoteness. Eastbound travelers must drive 110 miles to the next town, Austin, Nevada. Naval Air Station Fallon is a significant employer as well as the United States Navys premier air-to-air and air-to-ground training facility. Since 1996, it has been home to the Naval Fighter Weapons School, TOPGUN, and the surrounding area contains 84,000 acres of bombing and electronic warfare ranges. It is also home to the Naval Strike Air Warfare Center, NSAWC, which includes TOPGUN, the Carrier Airborne Early Warning Weapons School, TOPDOME, and the Navy Rotary Wing Weapons School. Navy SEAL Combat Search and Rescue, CSAR training also takes place here.