A Soldier's Story: UFOs Over The Falklands 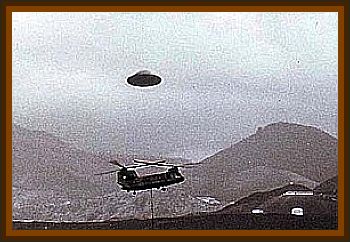 What you are about to read is the eyewitness testimony given by a soldier during the Falklands War. It has been truly different to face him, as his emotions left no doubts as to the sincerity of his experience. We shall call him Román.

The following is the literal transcription of his account:

What I am about to tell you, took place precisely in the 1982 period, we're talking about April 4 through April 10 at the El Condor Ranch, in Rio Gallegos. That ranch is currently owned by the pullover manufacturer,

Bennetton, and is located on Route 3. It measures more or less 10,000 acres, and we were surveying the area and providing security for it on account of the Falklands War.

At around 2:00 a.m. or 3:00 a.m., we were sleeping. Some of us were on duty and we felt that one of the sentries was banging desperately against the door in the place were we slept, and we were startled, because it was a terrible sound of desperation, as though he'd seen a monster or something like it.

When I opened my eyes, there was an intense white light outdoors, similar to the floodlights of a soccer stadium that light up the playing field. But there was a startling detail, the fact that it was snowing, there was a lot of wind, but the circle in which the light was contained was peaceful, even the air and weather was warm.

I also noticed that the other 2 soldiers outside were looking at the sky, where there was a gigantic spacecraft with lights, not a circular one, I perceived it as an oval body whose center gave me the impression of looking at the stars, but its lateral lights made a slight movement.

Those of us inside the house went out and stared at it for 15 minutes, more or less. We felt no fear, rather a sense of tranquility. At one point, it slowly began to move and vanished over the hills at high speed in a matter of seconds.

What was also astounding was that after it disappeared, the snow and the strong wind also returned, which was a shock to us.

And there we were, exchanging frightened glances over what we had experienced. We kept quiet.

The next day, an army helicopter with military personnel showed up and they didn't look like Argentineans; I thought they were Americans. They got us together in one place and transferred us to a sector of a given regiment, the 24th Mechanized Infantry Regiment, took us to a room and took away all of our accoutrements and uniforms, leaving us with t-shirts, boxer shorts, ankle boots without laces and locked us in the room.

Half an hour later, they took us to another room and began talking to us about what we had seen. Given the Falklands conflict, they thought it could be a new British weapon or some such, and this did not jibe at all with what we were thinking. We thought it was something unnatural, not of this Earth, but they advised us not to discuss the subject with anyone.

Then they took us to another place, a larger, shed type room, where we found another group of soldiers and sub officers. It turned out that among these sub officers was a sergeant I knew, don't know his name. We knew each other by sight and having chatted on another occasion due to orders.

He was a very strong and energetic man, very hard and mature in his decisions, but when I saw him, he was completely broken and lost. I started asking him what had happened to them, and it turned out that when we had seen this vehicle, and it flew over the hills, following what used to be Route 3, they had seen the light at the same time, closed their eyes, and then appeared in another location 2 miles distant.

All of the soldiers scattered over the ground. This is what I'm trying to tell you, imagine everyone sitting in the back of a truck, they closed their eyes, and upon opening them again they're all lying in a field.

This is what happened to two Army trucks and a YPF truck, whose driver appeared inside his truck but 2 miles away, near the police station.

All of the soldiers that vanished in those seconds and appeared elsewhere, 2 to 3 miles away, had undergone an experience wholly different from our own.

The main subject was that they were not to discuss it with anyone. Then the Army Command divided us up independently, we were each sent to war in different locations and never saw each other again.

I'm telling you this today, January 14, 2006, and what I'm telling you about took place in 1982. I'm willing to discuss it because of something I saw that gave me the answer, as to why that vessel looked transparent to me.

This is an anecdote of a real event that I'm sharing with the folks at the UFO museum so that you can write it down. I'm thankful to these people who are making known, at this time, the things that happen in this world. It seems important to me that we begin calling them by name and discussing our experiences.