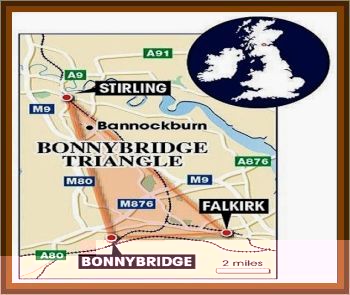 The tiny Scottish town of Bonnybridge has a big claim to fame, it has been dubbed the UFO capital of the World.

Since the early 1990s, residents have spoken of seeing thousands of mysterious objects in the sky they cannot explain. And a staggering 300 accounts of UFO sightings flood in every year, over an area that has become known as the Falkirk Triangle, which branches from Bonnybridge to Stirling and Fife.

Eyewitnesses claim to have seen everything from balls of fire and flying cigars to orange orbs and flashing lights in the skies above the Triangle.

One of the first sightings over Bonnybridge was recorded in 1992 when local businessman James Walker claimed to have seen sparkling triangular shapes form in the sky while driving home.

That same year, Isabella Sloggett and her daughter Carole reported an even closer encounter. They were walking towards Bonnybridge on a clear evening when they were stopped by a football sized blue light hovering above the road just ahead of them.

My daughter and I saw a UFO land right in front of us. A door opened and there was a howl like sound. I screamed and ran off, terrified.

In 2004, a number of locals independently claimed to have seen a cigar shaped flying craft land on a nearby golf course.

Despite the claims, it is hard to ignore the sceptics. They are quick to point out that Bonnybridge is under several flight paths serving Edinburgh and Glasgow international airports, while a commercial airfield is also in use just miles away.

Councillor Billy Buchanan says so many residents come to him with concerns about what is happening in the town’s skies that he has appealed to three prime ministers: David Cameron, Tony Blair & John Major, to order an urgent investigation. As yet no official investigation is underway.

In 1997, the Ministry of Defence replied, saying it was: satisfied there is no evidence that the UK’s airspace might have been compromised by hostile or unauthorised foreign military activity.

But Nick Pope, who was the lead investigator on a Ministry of Defence UFO programme between 1991 and 1994, said: There certainly was, and still may be, something going on in that area. We took this very seriously because the believers only had to be right once. Whatever you think about UFOs, the fact that these things penetrate our defence network and sometimes operate near military bases show it is an issue of national security.

When a sighting is made the first thing you have to do is try to eliminate what might be the obvious reason why a light or mysteriously shaped object is in the sky.

It is generally accepted that probably 85% per cent of UFO sightings can be explained as misidentifications of objects including planes or even planets. But that leaves 15% where there is no explanation for what has been seen and in some cases even photographed or recorded on film.

It is up to the individual to decide whether or not they believe that a solid object they have seen hovering in the sky above them is indeed a space ship travelling from an unknown planet.

No one knows why Bonnybridge, with a population of just 6000, should be the most likely place on Earth to experience a close encounter of the third kind.