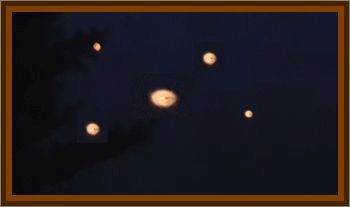 At 8:45 p.m. MST, observers including Airman William D. Offord saw a red object just above the horizon to the west. This object disappeared below the horizon. The observers moved to another position where they saw the red object again.

Over the next 90 minutes, five distinct objects the apparent size of a quarter, a nickel and three objects the size of a dime held at arm's length were observed.

The first sighting was called into the Golf One Launch Control Facility of the Minuteman missile complex, Ellsworth AFB, SD. Here Airmen Calenberg, Langerud & Delapp, spotted the objects to the west of Golf One. The quarter size object led by nickel size while dime sizes skittered erratically around the horizon and mountain tops in distance and returned to the quarter size and nickel size objects which stayed on a fairly stable slow moving course east northeast.

Air Force Helicopter 481 was dispatched from Ellsworth AFB with the Base Commander and a photographer onboard.