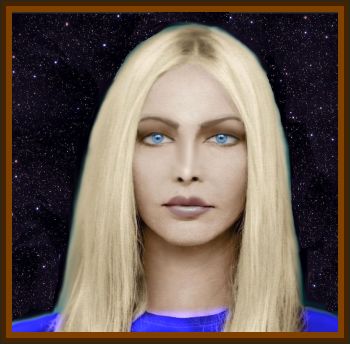 When I was 8, I saw my first UFO. When I was 15, I had face to face contact with an extraterrestrial.

She was what ufologists call a Nordic from the Pleiades Star Cluster. She was incredibly attractive, although she had very large human like hazel eyes.

She spoke not with verbal words but telepathically.

Although I was initially frightened by her meeting, she had a way to calm me, assuring me that I was safe.

She did not wear any type of spacesuit, she wore a blue and white loose flowing long gown. Her long blonde hair nearly met her elbows.

I know I had 1001 questions for her, but she spoke to interrupt them, telling me what I needed to know only. I did ask her name, but she said she had no formal name but a title. She called it tishkrit.

She was an inter stellar traveler. She laughed at our level of technology, but said in a great amount of time, our race, human, would advance close to hers. She told me before I asked, that she chose to visit me because I was open minded and intent on learning more than the average human. She liked me as a place to visit and would come back periodically, which she did about every 10 years since. Her visits are not as long as initially though.