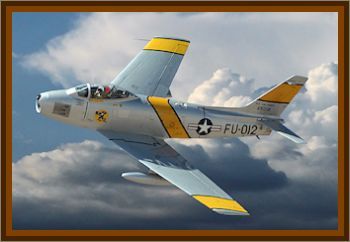 We were in clear air with unlimited visibility and although the sun had set and it was dark on the ground it had not become completely dark at 30,000'. Log Roll Control had just called my target, wingman, at 45° right, range 16 miles. That was approximately the maximum range the radar on the F-86D could pick up another fighter.

And as my search mode was trying to acquire my wingman, I saw a very strong return at 8 miles between my target and myself, and locked my radar onto it. My radar showed the target, it showed my true airspeed and no movement.

The object although showing a very strong return was not visible in the clear air. My wingman also picked the object on his radar.

I flew towards it until about 1 mile and then pulled left towards the West, to avoid hiting this object, I could not see, into 90° port and 270° fight turn with my wingman having joined up on me in loose formation. I locked on to the object again and at about 8 miles and it immediately lit up in a light green color that I could see through. It was approximately 100' high and 50' wide with its top and bottom both rounded off roughly in the shape of a football.

We both saw it and when we got about 2 miles from it my radar overtake went from my true airspeed to a 1300 kt undertake.

I selected when efull power and the object still lit up pulled away. At about 8 miles out it stopped instantly and did an immediate turn straight down. I followed it until about 15,000' and pulled out to avoid hitting the ground. We were about out of fuel at this point so we recovered at nearby Erding AFB and after getting refueled and getting airborne again Log Roll Control sent us home to Phalsburg AFB, France and our 513th FIS. They told us they had several other fighters under their control and did not need us.

Several controllers watched this on their radar including a General officer, I believe it was B.G. Stuart.

I was contacted several years later by a British author, on my home phone, who asked me question about the incident and he told me that he had also investigated another incident like this over England 6 weeks earlier.

I have never heard this incident judged, explained or discussed.