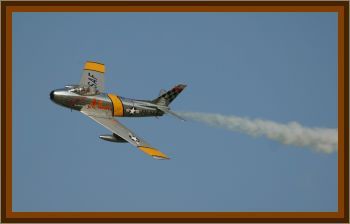 An F-86 aircraft was observed flying over the Oak Ridge residential area, making circles at what appeared to be approximately 2,500' or 3,500'. The F-86 flew over the area in this manner for approximately ten or fifteen minutes.

The witness, together with his wife, observed the aircraft through a pair of six power field glasses. After the aircraft flew in what appeared to be the direction of Knoxville, TN, a black object moved out of a high white cloud, directly over the area the F-86 had been flying. This object began to travel, at a tremendous speed, in a large circle.

This action on the part of the unknown object continued for at least five minutes. During the circle of this object, it appeared at times to be in the shape of a cigar and at other times round.

Not listed in neither the Blue Book Unknowns, nor the updated catalog, this incident was mentioned in the MUFON UFO Journal.