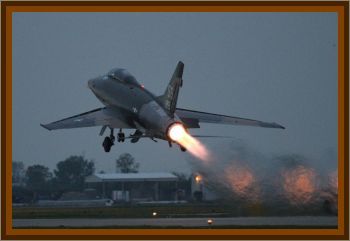 Two airmen on their way to midnite chow noticed what they thought was an unusually brite pair of stars. But, while they watched, the lights moved.

At first the 1st airman thought his eyes were playing tricks on him and he asked his companion if he saw the movement also, and in which he gave an affirmative answer.

While they watched them they moved in a rather silly erratic flight with no apparent reason, they maneuvered in a series of short jerks and bursts of speed to the front, rear, up and down while changing color slowly from a brillant white to a reddish orange.

They're jerky movements were only a few hundred feet at a time while changing altitude from 1,000' to 2000' estimated.

After watching them for several minutes at a distance of about a half a mile away he called Base Operations and reported the objects and their approximate position and altitude. What he learned from the operations officer is that he was going to call their GCA, Ground Control Approach, and see if they were picking up anything on their scopes.

They were, and two F-100s were sent up to investigate. He guessed the pilots decided to approach them from a dive because they climbed to about 4,000' and dove on the pair, and shortly after the dive started, the UFOs took off in a level flight.

When the F-100s began to gain speed the UFO's dove straight down within about 200' of the ground and continued to climb and dive too quickly for the jets to follow them, then climbed out of sight in about 10 or 15 seconds.

I have always been amazed by it, an army man writing another army man.