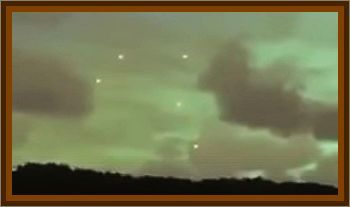 On Sunday evening, February 15, 1998, I was driving with two other people on Autoroute RN 13 between Evreux and Saint André de l'Eure when we spotted four luminous objects in the sky forming one shape or formation. It had a spherical form and remained stationary in front of us.

As we drove into Evreux the object was on our right. Then somehow we lost sight of it.

We dropped off Beatrice at her home in the Val David section of Evreux and drove down Chaussée D67, heading back to Saint André de l'Eure. We then saw three other spheres in a stationary group. The first in line suddenly made a jerky motion. Then the UFOs dispersed in all directions.

We stopped the car, and stepped outside to get a better look. We then saw the first UFOs return.

The intensity of the light varied, seeming to give an impression of shrinkage and expansion. All these strange phenomena disappeared after ten minutes.

We reported what we had seen to the police.