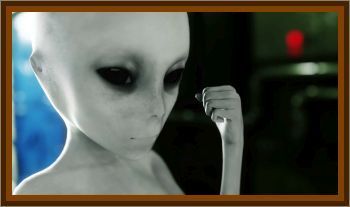 When I was 8 years old I went for a walk in the woods in the mountains in Colorado. There I had an encounter. I disappeared for hours. When I returned home, I remembered some of it but not all. When I tried to talk about it, my parents just said I had an imagination.

In 1985 I went to a hypnotist, and had him take me back. All my life everything kept coming back in dreams and thoughts. By 1985 I was in tears most of the time. I couldn't get them out of my mind. Also throughout my life I had other sightings, telepathic messages sending me places, and sometimes others with me, and saw what I saw.

After my sessions with the hypnotist, I remembered. And knew I wasn't crazy. I remember standing under the ship, it cast a circular shadow, and I could see the sun shining on the ground around it and in the trees. I don't exactly remember entering the ship, but I remember being on a moveable table or something. There was a small being walking besides me. He didn't scare me, actually I felt safe as long as he was there. I remember going down an oddly shaped corridor, with light that seemed to come from the walls. I remember going past an area that looked like some kind of control area. It was all high tech, smooth, and hard to describe.

I drew pictures of everything I could remember, including the panel boards of sorts. The small being with the very large eyes was still with me. Then I remember passing an area with floating spheres and another type of a being. Very tall, bald, large head, large eyes, but not as large as the small being.

I called them the Elders, they seemed so intellegent, and aware.

Then before I entered another area I saw another being, whom I will never forget. He was humanoid, and very impressive. I felt very safe. When I entered the area, there was a baby, maybe about one. It was sitting on a table, then a large transparent amber colored round flat object dropped down in front of it. The baby was startled, but calmed down when it stopped in front of it. It had two arms on the side of it that controled its decsent, and was secured from above. It had areas in it that were indented,

Then they stopped me next to a girl that was laying on a table. She had a clear thing kinda domed over her head. She just laid there. I can't remember too much until a while later when I was placed in an area with others. The area was darker than the areas I'd been in, and the ceiling had lights on it. The whole ceiling and lights rotated and in the middle the lights were pulsing. after being in there, I couldn't remember much. It is as if they tried to erase my memory. They did a lot of it, but somehow, I was able to remember some, and sub-conciously I retained a lot of memory.

I tried to tell people, and my parents, but no one would take me seriously. They just thought I had a big imagination. And throughout my life I kept encountering them. Sometimes I'd see the ships by myself, and at other times there would be other people with me, so I knew it wasn't my imagination.

Now that I am grown and have kids of my own I am scared. I have 6 children, and one night 5 of them were with a babysitter, in Gonzales, LA. I went out to eat with a friend. While eating I got this real uneasy feeling, and told my friend I had to get home right away. We doggie bagged our dinner and left. When I got home the babbysitter was screaming, the kids were all talking and excited. After calming everyone down,I asked the sitter what happenen. She said that my daughter had come in to say that there were lights in the sky outside. So everyone went out to see. When the lookede the lights were gone, then they saw it. An object of sorts hoovering about 25' above the house. Silent, no sound, and strangely no lights. Just a dark object, that you could see the shape. My daughter ran into my shop and hid under my tee-shirts on the rack. The babysitter said she tried to get the rest of the kids back into the house. She said she got them in for a moment but they ran out again. They said I came home just as the object left. She was my friend, but didn't come back to my house for a year. It really scared her. And made believers of my children.

I don't know what I would have done had I been home at that time. Why did they come? What do they want? And why when I see them, do I feel some kind of a connection with them? They are strange, yet not strange, alien yet not alien. I don't know what they did to me when I was younger, nor do I understand how they can get into my head. I mean, one time they told me to go to Giant Rock Airport in the desert of California. I heard them in my head all day. My husband told me to just go. I ended up with 4 other people and we went to the desert. There all five of us watched a ship in the sky, moving all over the place. Now I had witnesses, I was not alone. Then once I disappeared for hours. I was only going to the store. I had taken my (black) kitten with me. when I got home, I told everyone that I had seen a ship, but I didn't know I had been gone very long. But it had turned my black kitten into a black and white kitten. There were white hairs all over it. And I don't remember anything except seeing the ship. Yet it had been hours, and to me only moments. And the kitten was my proof. Everyone at the house saw it.

That was a good calling card. Now, I don't know what the future has in store for me and the children who now are adults, and know that something else is going on, that none of us understand. Maybe someday we will find out why, if they ever return.