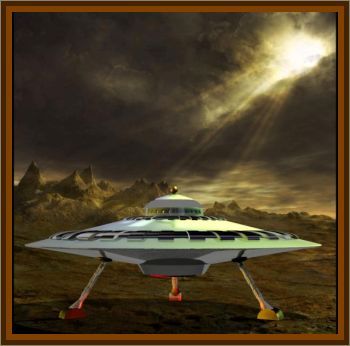 He saw an object in the field about 100 yards from his home. He thought he was dreaming, and went back inside.

About 20 minutes later, he went out to call his dog and found Frisky and other dogs across the road in the field by the object.

Outside the object were two men and two women, apparently normally dressed. One of the men grabbed at Frisky, who growled and backed away. He grabbed another dog who attempted to bite him, so he let it go.

During interviews later, Everett said the people talked like German soldiers he had seen in movies on television. When they got into the ship, they looked as if they walked right through the side, as if it were glass. The object took off straight up and made no sound. It was long and round, said Everett, and of no particular color. Asked if it could have been translucent, he said he guessed so.

Other information that bears on the incident is that one of the men had motioned to Everett to come to him, but Everett declined. He was questioned by reporters to ascertain whether he had heard of the Schmidt incident, but he apparently hadn’t.

The Schmidt story was just hitting news wires late on the preceding night and didn’t appear in Knoxville papers until the 6th.

When reporter Carson Brewer went to the field with Everett and others, he himself saw an oblong ring of pressed grass. He found he could not make a similar marking unless he walked round and round at least a dozen times. The impression was 24' x 5'. Everett said the object was considerably larger than that, however.

His father remarked later: I don’t think he made it up, but I still don’t believe it.