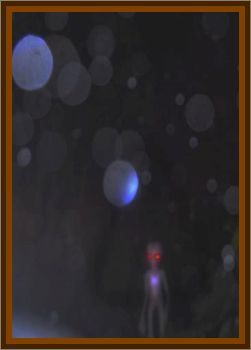 Eve, pseudonym, was only 12 years old when she had an eerie encounter with the unknown. She was living with her Aunt and her cousins in Gulfport, Mississippi, during that summer. Playing in the yard with her cousins, she began to feel a strange sensation. Like something or someone was calling her, or watching her. She looked behind her, and was stunned by the sight of a craft in the distance. The craft had an array of colored lights, an intriguing sight to any 12 year old.

The lights were blinking on and off. They encircled the strange craft, and these lights seemed to be of a color she had not seen before, and were extremely bright and clear. In her own words, The more I looked, the more I wanted to keep looking. Though the duration of the sighting had been unnerving, she now felt a strange sense of being at ease. She could not take her eyes off the craft and its twinkling lights. The sighting had interrupted their game of hide and seek. Eve was it, and since she was taking too long to find anyone, the others began to call for her. Eve could hear their calling, but she could not respond to them. She was strongly drawn to the craft, as if she was glued to its presence and magnetism.

She turned back to get one more look at the craft, and noticed it was much closer now. She could see two beings inside through a window. She could make out part of one of their bodies, another being seemed to be controlling the UFO. The two appeared to be talking with each other. Both of the beings had long, slender arms, and the pilot of the object seemed to be focusing on Eve.

The craft moved even closer to the ground now. Eve could hear no sound, but felt she was being targeted. In her frantic run for safety, she looked back to see where the house-sized object was. A white beam was now projected from the bottom of the object, obviously searching for her. She made it to the bushes before the beam could find her. There were now 3 other craft just like the first. She could sense they were working in unison. A 4th craft was now moving slowly. Wondering if she should make a run for the house. Another craft now filled the place of the first one, and began searching the ground around the house & bushes.

She ran for the house, and tried to open the screen door. There was no answer.

Where was everybody? she thought. She called to her Aunt, who eventually came to the back door in her bed clothes, and asked Eve,

Her Aunt asked her what she was doing out so late. Eve told her that her cousins had just came in a few minutes before. The Aunt's reply shocked her.

Everyone has been in bed for a while.

In Eves mind, she had only been outside about 5 minutes after her cousins had ran into the house, Wondering What had happened?