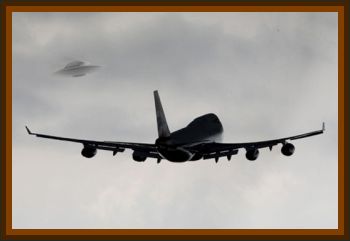 The 3 man crew of an Eastern Air Lines ferry flight from St. Louis to Miami saw a string of unknown lights that caused the pilot to take evasive action.

In his report, the pilot said the light was at their 11:30 o'clock position about halfway between Jacksonville and Orlando, Florida.

Who’s this at our 11:30 o'clock position? Capt. Reilman asked a nearby control center.

The center replied that they had been in communication with a plane 15 miles away.

Well, this guy isn’t 15 miles away, the pilot replied. He’s at 11:30 o'clock, has one flashing red light and 3, now 3 red lights strung out, one red light turned to green.

At this point, Capt. Reilman prepared to take evasive action.

The center radioed back that they had spotted no targets on their radar scope.

Come on, Reilman responded, he’s going right by us at our 9:00 o'clock position.

The center still replied that they had no targets and that no balloons were in the vicinity.

I dropped the subject and proceeded to Miami, the Captain concluded.

Pacings of ground vehicles have often badly frightened the witnesses, showing that official debunking and denials have not abated fears of UFOs.

If anything, they have increased such fears, since many citizens believe the facts are kept from them.