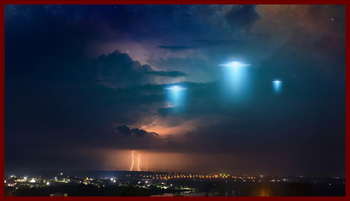 That’s how many times the U.S. Air Force fielded sightings of unidentified flying objects between 1947 and 1969.

Back then, they were toiling through the infamous Project Blue Book, an effort to investigate the scores of UFO sightings that popped up all over America during the Cold War.

Military officials dismissed a huge chunk of them, sometimes conjuring ho-hum explanations such as the time honored weather balloon. But by the end of the project, more than 700 reports of strange lights or shapes in the sky remained unexplained.

This month marks 50 years since the Air Force shuttered the project with a shrug. According to findings released on December 18, 1969, the Air Force said none of the sightings represented a threat to national security. And, most importantly, none of them had anything to do with aliens.

That didn’t dissuade the true believers, of course, including the hundreds in the Evansville area who reported sightings of their own.

And it certainly didn’t change the mind of Norman Massie.

The long time Southern Illinois teacher and basketball coach lived through a chilling close encounter decades before Project Blue Book was even a twinkle in the government’s eye.

He sold World Book Encyclopedias on the side, schlepping hardbound volumes to knowledge hungry residents all over the Tri State.

But if you punch his name into Google today, none of that will come up. Instead, he’s become infamous for something he saw when he was only 10 years old.

According to an old Courier & Press column by Len Wells that’s been pirated and shot into the weirdest corners of the internet, Massie grew up in the tiny town of Mount Erie, IL, about 60 miles west of Oakland City.

And one morning in June 1923, he led the family horses into the pasture.

As I was closing the gate, I looked back down the field and there was an object with lights all around it, Massie told Wells in 1998. The machine was metallic and stood on 3 legs, the top was a dome with holes in it. The best way I could describe the top was it looked like melted glass, he said.

When he got within 50' of the thing, he realized he wasn’t alone. Men milled around inside the ship, taking orders from a seated fellow they called The Commander.

I didn't know what was going on until the end, then, one of the crew members told the commander that the repairs had been made, Massie told Wells.

With that, the ship shot off the ground and zapped across the sky, disappearing forever. Massie told Wells the encounter couldn’t have lasted more than 5 minutes, but it haunted him for the rest of his life.

Project Blue Book reports are filled with people who begged to remain anonymous. Everyone will think I’m crazy, they’d say.

It makes sense. Admitting you’ve seen something supernatural makes you an instant target for derision. And it hasn’t gotten easier since Project Blue Book closed. Just last year, an Evansville woman who reported a UFO sighting to Eyewitness News was awarded with a story in which the reporter slapped on a tinfoil hat and waved around a toy spaceship.

But it was probably even more taboo back in 1923. So naturally, Massie’s parents begged him not to talk about his experience. Keep the metallic ship, and the Commander, to yourself, they said.

That’s when he shared the story with his son, a former colonel in the Air Force. He probably expected to be humored and dismissed, but the story didn’t surprise his son at all.

He said the Air Force files are full of pictures of UFOs, he accepted my story as the truth, Massie told Wells.

In my own mind and my own heart, it existed. And I saw it with my own 2 eyes.

Wells wrote a column about the sighting after Massie died in 2004 at the age of 91. He knew some people may think Massie was crazy or a liar or some poor naïve man who had convinced himself that this ludicrous story was real. After all, sometimes the magic of childhood can harden around a memory and give it an otherworldly sheen that could never exist in reality.

But according to Wells, Massie wasn’t that kind of guy.

I've heard Norman tell this story many times, and it was always the same. Never embellished from one time to the next, Wells wrote.