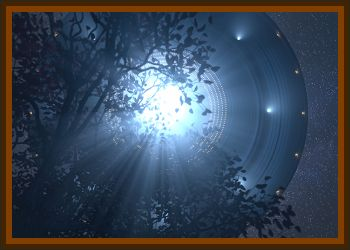 My family has shared the following information with very few people in fear of being thought completely crazy.

My dad was a rancher, my mom a housewife, my brother and I students. Our personal experience with an UFO was in Estes Park, CO, somewhere around 1952-1957, truthfully, I am not sure of the date, but I was around 8 to 10 years old.

We lived on a small ranch on South St. Verain Rd, about 3 miles out of the town of Estes.

It was in the evening, it was dark outside. My mom was in bed with the mumps, my brother was laying on his bed reading. My dad and I were in the kitchen doing dishes from dinner.

My brother’s bed sat along the south wall with the foot of the bed next to a window looking South out to our horse pasture.

My brother, approximately age 13 or 15, started screaming for us to come. We all ran into his bedroom and saw an extremely bright white light coming through his bedroom window from an craft floating above the tall pine trees. It came from a ship, for want of a better word, that looked like the fuselage of a large airplane but there were no wings.

The object was about the size of a smallish to medium size commercial aircraft. It looked to be metallic silver and there was absolutely no sound coming to us from the open windows. The lack of sound is the one thing that has stayed in my mind all these years.

I’m not sure how long we stood there and stared at it, it did not move at all.

Then, it moved upward, we could then see a glow kind of like a lit cigar but no flames coming from the back, still no sound.

After it reached a certain altitude, it went toward Twin Sisters Mountain and then continued on through a gap in the mountains in the general direction of Boulder/Denver, CO.

I talked with my brother recently to refresh what we remember. He said that the fire lookout people stationed on top of Twin Sisters also reported it and that the Rocky Mountain Newspaper reported that the nearby Air Force Base sent airplanes up after it was reported in the Boulder/Denver area.

He remembers reading that the planes could not keep up with the UFO and lost sight of the craft.

My mom called the Police Chief in Estes Park, and his only comment was:

Don’t tell anyone what you saw.

She did tell our neighbors to the northwest of us. They seemed to believe us but didn’t say much at all.

About 3 years later, we moved to Longmont, CO. One night after we were there a few months, our Estes Park neighbor lady called us and said she had seen the same thing that night.

She had picked up her daughter from a school dance and was driving back out to the country area we lived in when her headlights hit an object crossing the road in front of her. This was pretty deserted country at that time.

She said the description we had given her about our UFO fit this one exactly. She seemed very upset and scared when talking about her experience.

I do not know if she reported it to the police or not.

If you have any information of other sightings, that fits the area of time period or in this area, we would be most interested in hearing about it.