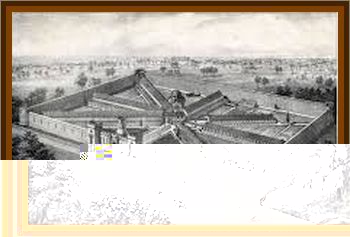 Opened in 1829 with castle like walls and imposing guard towers, Eastern State Penitentiary (ESP) in Philadelphia, PA, was the first prison to institute solitary confinement. Prisoners lived alone, ate alone, and even exercised alone in individual yards. When an inmate left his cell, a guard covered his head with a hood so that he remained in confinement. Although the solitary system was quickly discarded due to overcrowding, ESP is widely believed to have caused mental illness among its prisoners.

ESP welcomed its first prisoner in 1829, seven years before the prison was finished. Charles Williams, prisoner number one, was imprisoned for burglary. He was described as having light black skin, 5'7" tall. Foot: Eleven inches. Scar on nose. Scar on thigh. Broad mouth. Black eyes. Williams, a farmer, could read; according to his intake documents, Theft included one $20 watch, one $3 gold seal, one, a gold key. Sentenced to two years confinement with labor.

It operated as a regular prison from 1913 until it closed in 1970, during which time it housed both Al Capone and bank robber Willie Sutton, and Pep "The Cat Murdering Dog" to a life sentence at Eastern State. Pep allegedly murdered the governor’s wife’s cherished cat. Prison records reflect that Pep was assigned an inmate number (no. C-2559), which is seen in his mug shot. However, the reason for Pep’s incarceration remains a subject of some debate. A newspaper article reported that the governor donated his own dog to the prison to increase inmate morale. Pep started serving time on August 12, 1924.

Many people believe that ESP is haunted. As early as the 1940s, officers and inmates reported mysterious visions and eerie experiences in the ancient prison. And the ghost sightings have only increased since it was abandoned in 1971. One author has stated: In my opinion, there's not one ghost, not three ghosts, it's a stew of souls, restless spirits that swirl for eternity here at Eastern State Penitentiary.

The prison was abandoned in 1971, and rumors of strange happenings have plagued the stone penitentiary ever since. Visitors to the prison, report footsteps in the yards, the sound of someone pacing in the cells, eerie noises, and lonely wails that drift through the cold, dark corridors. Cell Block 12 is famous for its disembodied laughter, and one guard tower appears, on some nights, to be occupied by a shadowy figure keeping watch over the empty prison.

Completed in 1911, Cellblock 12, wedged between Blocks 6 and 7, was drastically different from the blocks that preceded it. Built of light colored reinforced concrete, this block consisted of three floors with 40 cells each. There were no arched ceilings and, instead of skylights, each cell had a narrow window. The congregate prison was more violent than the solitary confinement institution. You can see steel bars spanning each floor level, which were installed to discourage inmates from throwing each other from the catwalk.

Eastern State housed about 85,000 inmates throughout its 142 year history. More than 1,200 inmates died behind the walls, about half of them from diseases like tuberculosis. More than 50 inmates killed themselves, and over a dozen died violently at the hands of fellow inmates.

As actor Steve Buscemi notes, the building itself is certainly haunting, if not haunted.