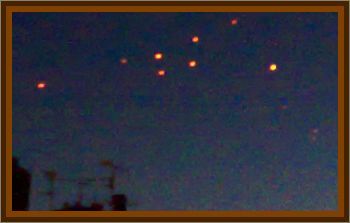 The nocturnal visit by colored lights in a clear sky over Hicksville Sunday evening was as real a UFO experience to several local residents as those reported by men and women in Mississippi and other states throughout the week. Several Hicksville residents, including Hicksville firemen answering a fire call just across the Ohio/Indiana border, reported between 15 and 30 lights in the sky acting in an erratic manner, while people in as far-flung areas as Defiance and Paulding Counties & Goshen, Indiana, reported their nerves and windows shaken by a loud boom around 9:00 p.m.

The noise was presumed to be a sonic boom since military jet aircraft were observed in the area, by more than one resident at that time. Law enforcement officials reported that local residents flooded their dispatchers with telephone calls about the noise shortly after it had been heard. Defiances Post 20 of the Ohio State Highway Patrol received 28 calls on the matter, while a frustrated night desk-man for the city police and county sheriffs department reported 100 calls concerning the boom. J.B. Pavender of the Office of Information for Wright-Patterson Air Force Base, Dayton, stated this morning that, We've had 3 such reports of loud noises throughout the country in the last week. However, he added, nothing had been determined thus far in his investigations. We're still tracking.

Hicksville firemen were at the scene of a fire on DeKalb County, Indiana. Road 75 at 7:45 p.m. Sunday when the rumors evidently began to fly. Officials at the scene stated that one man reported a flying saucer had landed and started the blaze, and that other saucers could be seen in the sky. However, Mrs. James Snyder of Route 1, St. Joe, IN., told the Crescent-News 2 hours later that the fire was located in a woods a half-mile behind her house, and that it had been going since 10:00 a.m. Sunday morning.

I saw smoke there on my way home from church, she said, and called my neighbors, who own the woods there. Ladd's wife agreed, and said that her family had put the fire out two different times in the day before Hicksvilles two pumpers and one tanker arrived on the scene. Neither the women nor Hicksville fire officials knew the cause of the blaze, which burneded 4½ acres.

The fire-fighters first noticed the UFOs varied-colored lights as they were putting out the flames. They reported numbers ranging from 20 to 30 flitting about the clear night sky between 7:45 and 9:15 p.m.

Stated one of the men:

We got a report that there were three greenish-white lights up there, one in the east, one in the northeast, and one in the southeast. As I watched it, the one toward the southeast circled around and shot out in a big hurry, disappeared. There were 20 or 30 lights up in the sky, I suppose. Some you could hear engines on, and some of them you couldn't hear anything. They might have been planes, but if they were, there were a hell of a lot of planes up in that sky!"

Others described the lights as being a variety of colors, and either blinking or circling around. There was no pattern to their movements, and many were reported to shoot across the sky at a faster speed than that at which airplanes would normally travel. The talk of UFOs increased as the firemen joked between each other over radios and the bantering was picked up by area residents and local law enforcement officials. Calls from the frightened, the skeptical, and the curious were received by both the Hicksville Police Department and the Defiance City Fire Department.

Adding to the fear and speculation that interplanetary visitors might be in the air was a loud explosion heard in Hicksville, Defiance, and other parts of the county, and as far away as Goshen, Indiana, and Paulding County. Hicksville firemen, who placed the boom at about 9:00 p.m., said that it was followed within five seconds by a jet engine kind of sound, and several people tied the two together as the takeoff of a UFO. Robert Easley of Defiance, who has been studying the UFO phenomenon for a number of years, said he had been telephoned at home by people from all over, following the noise, with some callers asking him if it might have been the explosion of a space craft. A Hicksville policeman stated that chatter over a radio monitor carried the news from some airport, that the noise was a sonic boom caused by conventional aircraft.

A Defiance College student told of sitting in the Anthony Wayne Library on campus when the sound was heard. She described it as similar to someone with a big foot jumping on the roof, the windows rattled and other students in the building noticed it, too. Five minutes later, there was a sound like someone blowing out air between the library and the nearby Student Union.

One Hicksville man, who asked not to be identified because of people laughing it off, described the aerial light show in detail. He had heard the towns fire department broadcasts over a home monitor, and drove to the area just south of Ohio 18 and west of the Ohio/Indiana line to see what was going on. There were a lot of lights up there in the sky, I'd say at least 30. Some were whirling around and around, and would fly across the sky really fast, too fast for an airplane. Others would cut straight across, and then shoot upward. Some went straight up in the sky and disappeared.

You could look just about anywhere in the sky and see them. They'd jerk across, he continued, using his hands to show the short, choppy pattern of flight, and there would be flashes of light in between bursts. You'd have to look quickly to see them move, though. I don't know what they were, but I don't think they were airplanes. You couldn't hear any engines, for one thing. But I'll say this much, there was something up there! His wife, also riding in the car at the time, called the lights shapeless, and ranging in color from the shade of red in street flashers to green and blue. You couldn't tell how far away they were, or how fast they were going. But it was really something, I'll tell you.

Asked if she believed in unidentified flying objects, the woman replied, Sure, and I'd like to be taken aboard one sometime and have some proof, so I'll know for sure.