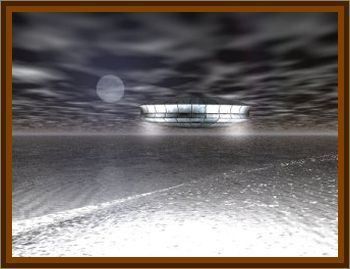 Sheila and Henry Baker were driving home with their 3 children about 8:35 p.m., after going out to dinner. As they neared the waterfront, Sheila noticed something hovering over the lake and they drove down to the beach to investigate and got out of the car. The moon was bright and there was ice on the lake, Sheila could hear it cracking like claps of thunder. Plainly visible was a huge, gunmetal gray football-shaped object that was rocking back and forth, blinding white light emanating from both ends, but it was silent. Then the object began moving, swinging one end toward the shore and descending. They became frightened, ran back to their car and fled. When they got home, the object was still visible from a window that faced the lake. The object moved out over the ice and continued to descend, with red and blue lights now flashing in sequence along its lower edge. Sheila then called the Eastlake police to report a UFO, and was finally referred to the Coast Guard.

Suddenly 5 or 6 bright yellow triangular objects shot out of the center of the large object and began darting around independently. Once they stopped & hovered, point up, around the parent object, then sped away to the north, turned east, then inland toward the Perry nuclear power plant. At this point Sheila called the Coast Guard, which sent a team to their house to investigate. Seaman James Power & Petty Officer John Knaub arrived towing a Boston Whaler, a seaworthy boat. When Sheila pointed to the main craft and some of the triangular objects still zipping around it, the men drove closer to the lake to investigate, accompanied by the Bakers. At the lakefront they could hear the ice rumbling and roaring. In their incident report later sent by teletype to the Coast Guard headquarters in Detroit, Michigan, the men were quoted as saying that the ice was cracking and moving abnormal amounts as the object came closer to it.

Power & Knaub gave a running report to their base via the two-way radio in their Chevy Suburban on what they were seeing. The window was down, and the Bakers overheard them saying words to the effect:

Be advised the object appears to be landing on the lake, There are other objects moving around it. Be advised these smaller objects are going at high rates of speed. There are no engine noises and they are very, very low.

One of the triangles zoomed straight toward the Coast Guard vehicle, a blur of light, then veered east, straight up, and came down beside the parent object. Two witnesses in separate locations also reported seeing the triangles. Suddenly the triangles returned and one by one entered the side of the parent object as it seemed to land on the ice. The ellipse flashed a series of red, blue, & yellow lights, the light emanating from the end of the object turned from white to red, and the triangles re-emerged and hovered above it. The noise from the ice abruptly ceased, and the lights and triangles disappeared.