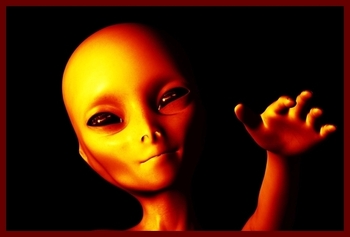 Renzo Pugina, 37, a stock cubes salesman, was parking his car in the garage of his villa, he was returning from seeing a movie.

Pugina noticed a soft glow in the park of the villa, but he attributed this to the moon. After he had parked the auto, Pugina reportedly ascended one flight of stairs connecting to the principal lane of the villa, when he observed a strange figure at the top of the steps, adjacent to a tree. The creature was 4' tall, and presented his left side to the witness.

According to one of the main press sources for the case, Pugina stated that:

He recognized the being to be a Martian. He couldn’t have been anything but a Martian.

The creature was surrounded by a soft, warm light and appeared to be encapsulated in armor. It wore a helmet which was transparent in the front, and it seemed that most of the light emitted by the creature was concentrated at the top of its head. The upper part of the body, up to half of his trunk, was covered in slightly luminous overalls comprised of metallic scales, like a fish, while the rest was contained in a great pipe 20" high and 8" wide, no legs were visible.

A much smaller pipe was attached horizontally to the first one, remaining just inches above the ground. This was approximately 6', according to one source. Nearly at the end of this pipe was a luminous disk as large as a bicycle wheel. Its upper part was dome shaped and orientated horizontally over the pipe, but there was no apparent contact between the 2 elements.

Pugina started to climb the steps, but after a few seconds, the creature rotated his trunk towards the man, to his left. He also slowly rotated his head, as if manipulated by some mechanism. The creature held a type of flashlight in its right hand, inside of this was something like a light bulb which produced a faint illumination. The device was directed at the witness who, simultaneously, felt paralyzed, one source claimed that Pugina was struck by a beam of light. The witness remained in this state for some time.

Pugina noticed that the outer features of the creature’s face were rather normal yet striking, featuring almost no forehead and eyes that were almond shaped. Its face was olive in shade as if it had been splashed with car motor oil.

Then Pugina grasped a bunch of keys in one of his hands, he regained control of his body . Pugina advanced a few further steps toward the creature, pronouncing in Italian just one word: Marte. or Mars. He did this in order to communicate to the being to not leave. The creature appeared to grimace, while Pugina advanced another step in its direction. At this point, the creature alighted 3' off the ground and flew away along the lane of the villa, maintaining a flight path below the tree branches. The being produced a soft buzzing noise.

Pugina ran along the lane, but the creature disappeared behind a curve. The entire sighting lasted but a few minutes. The witness’s wife was sleeping but she woke up as a result of Pugina’s hasty arrival. He was in shock, could not speak, and was shivering. Pugina’s wife said that her husband shivered all night long.

The press reported that Pugina remained in bed for 2 days as a consequence of his encounter. Evidential trace was found on the gravel of the villa’s lane the following day. It was odorless, dry and greaseless. One or 2 days afterwards, this trace area had greatly expanded.

The local Carabinieri claimed that Pugina was a normal individual not known to drink or to suffer from psychological problems.