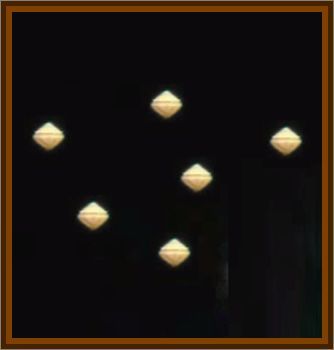 In 1969, my friend Steve, my brother, and myself were sent to a secret base in Mexico to live and study on an olive & avocado plantation some 15 miles south of Ensenada, Mexico, about half way down the Baja penninsula. We all belonged to the Church of Scientology, and they had secretly smuggled a bunch of us down there where we were to study the mechanics of Dianetics and Scientology, for our own benefit and that of the Sea Org, as it was called then.

We were housed in one large tent which was situated some 2,000', or not quite a half mile from the ocean, where which was the vast expanse of rocky bluffs above the actual beach, that were maybe 40' to 50' high in most places.

One night around 11:30 someone noticed the lights over the ocean, so we all went out to the edge of the bluffs to watch.

Six brilliant diamond shaped craft were dancing in some irregular pattern over the coast, maybe no more than two miles out. These craft would sometimes actually stop momentarily, then streak off again in some strange angle, seemingly mentally connecting with all of us.

Even today, many years later, my brother and my friend and I often discuss this incident that happened so many years ago. We did feel a distinct feeling that not only did these craft know we were there, but that they were actually trying to communicate with us. We know that these craft were from somewhere out of our world.

Two weeks earlir we all experienced a light as bright as the sun outside our tent, so we went outside and saw a disk shaped sphere glowing flourescent white intense light. These were the incidents that we all wish to report.