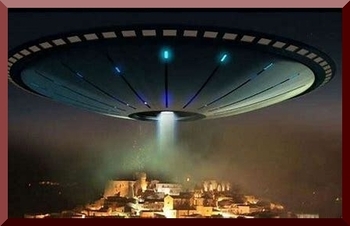 At the borders of Ohio, West Virginia and Pennsylvania, a huge object said to be about the size of a large shopping mall and parking lot was reportedly sighted in the early morning hours, by a veteran who worked in the helicopter aviation field while in the military. According to a report, truck driver Tim Comstock was on Route 7 north of the town of Empire, Ohio, at 3:45 a.m. The area is in Jefferson County. After first seeing a brightly lit object the size of a large pickup truck apparently slowly rising above the tree line, Comstock noticed a much larger dark object that included three bluish lights in a triangular pattern. The bright object seemed to be rising toward the larger object, Comstock said. He related that he took three photos with his cell phone camera that caught both the brightly-lit object and the three bluish lights in the triangular formation. The encounter started as Comstock was driving and saw other cars pulled over on the side of the road.

He was quoted as saying, As I was driving along the route, I noticed there were a couple of cars alongside the road with their lights still on. People were standing outside their car and that peaked my curiosity about what was going on. I looked in the direction that they were looking, which was toward the top of a rather large hill. I looked up and there was a very bright object just above the tree level. I can't really say for sure what it was because I've never seen anything like it. It seemed self-luminescent. It was about the size of a large pickup truck and it was very bright whenever I looked at it. That's really what caught my attention. 5 or 6 cars were pulled over, the people standing there looked like they were stuck, just transfixed watching the objects. They weren't moving. They were just standing almost completely still. They were pretty awestruck. And it was extremely close to the small town of Empire, Ohio. I don't know if people there saw it. Maybe it was too late at night. It didn't look like anything mechanical by any means. To me, it looked like a cocoon.

When I saw it, I was trying to take everything in and that's immediately what I thought when I saw it, that it was organic. That's the feeling that I got. I didn't think it could be anything else. It just came across as something organic. He said that as the object rose, he was able to see the larger object from the light given off by the smaller ascending object. The larger object with the bluish lights seemed to be basically stationary. As long as I had it in my field of vision, it seemed like it might have risen from above the tree line, I would say a couple thousand feet. It was a white light with a little bit of orange inside of it. It had a little bit of red and the shape just seemed so strange to me because it seemed like a biological shape. As I watched that shape, it was rising upward. As I looked above that, I saw a pattern of 3 bluish-colored lights. They weren't flickering like a star. They were in some kind of sequence, but they were all in tune with each other. They were very large lights. They were definitely not stars. I'm judging this because I was in the military and worked on helicopters, so I can tell this was pretty low because a couple of thousand feet seems like a lot, but it's really not.

It seemed like it rose a few thousand feet and then the craft, by the time I lost sight of it, it seems like it might have been maybe 500' from whatever the object was above it. So it was definitely getting closer to the triangular craft that was drawing it in. As the large white-orange object was rising up, it looked like it was going into the center of the triangle of blue lights. At first glance when I saw the triangle of lights and rising, glowing object, I could not process what was going on. As the white-orange object got closer to the triangle of lights, I could see from reflected light that the underside of the inside of the triangle pattern of blue lights was one object, one very, very large object. When I saw it with my naked eye, I saw the bottom of the craft and it looked like it was very flat.

He described the color of the larger craft above as being dark gray or black. He said he thought it had a crystalline type of surface that reminded him of a cracked open piece of coal. It was big. About the size of a large shopping mall and parking lot. As I was driving, I actually slowed down to about 2 MPH and there was no safe place on the side of the road. I slowed down almost to a stop and I was able to get a really good look the whole time everything was happening just above my head. I was able to slow down enough to hold the phone outside my window and still have a view inside the window frame and I was able to take the three pictures there.

Comstocks feelings about the encounter are puzzling even to himself. He said, I gave the photos to a couple of my friends to look at. I still have the photos on my phone. I sent them to my wife. I went home this week and I would not look at them on the computer. My friends were telling me about how amazing they are to look at in the larger size and I just can't bring myself to look at them. I don't think I'm afraid of it. It's something that is such an awesome thing that I just can't wrap my head around it. It's one of those things that if I see it again, whatever I saw, I started trembling and the hair on my arms stood up and I knew I was in the presence of something beautiful and much larger than I could possibly fathom. It was just the most beautiful thing I've ever seen. It's a very strange feeling. I don't know. I can't explain it 100%. I can't really fathom why I would feel this way about it, but it was something that struck me as beautiful and awesome at the same time. I suppose that once I've calmed down on the inside, I'll be able to look at them.