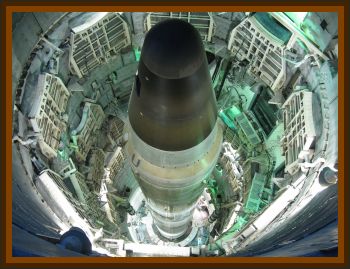 I know this incident happened, and I believe he is telling it the way he knows it.

At that time the launch officer in charge of that site dispatched a strike team consisting of 2 Combat defence Team Members to investigate the intrusion at the silo.

At the time of their arrival they saw a flying saucer sitting on top of the launch tube door of the missile site, with small objects around the security pit.

I don't know what happend at that time, but what I do know is that the strike team left the site at a high rate of speed, down a very narrow 1 lane dirt or gravel road, with a spot of light paralleling them. at some point they lost control of the pick up truck they were driving, and rolled the truck totaling the blue truck they had been driving. I do not recall them being killed, but I believe that they were hurt.

I personally saw the truck after it was wrecked. It was totaled.

I was one of them. I saw no UFOs, only satellites.

I also know that another maintenance team was dispacted to the silo in question. For what, I have no first hand knowlege why.

UFOs visited our Minuteman ICBMS during the summer of 1966 and I was there.

Another old sighting. I was a System Analyst for SAC in the early 1960 and stationed at Ellsworth AFB, SD. I held the nation's highest security clearances, daily handled nuclear weapons and carried launch codes and keys.

I thus took no drugs, was a tea toddler and have never hallucinated in my life. I was on active duty at the time.

This was early summer 1966. I was on base during the evening, when excited reports of UFOs on our silos were being passed around in the living quarters among the men person to person.

Excited utterances, they are called in legal jargon.

I went down to Job Control, which tracked the 150 missiles and the 10 Launch Control Centers. These Centers were manned, 24/7, while the missiles are unmanned.

That evening, in Hotel Flight, as I recall, we had an outer zone security violation, meaning that something had passed over the silo, this is often blowing vegetation or a light footed animal. The system will generally reset with the manual override.

However this silo did not reset.

Worse, it was soon followed by an inter zone violation, meaning that something large enough to set off the vibration sensors or to touch the combinations locks, was on the site.

When the violations happen in this order, the manual calls for a strike team to be dispatched from the LCC's above ground facility, which would be between 10 and 20 miles distant. These teams generally consisted of 2 Air Policeman with automatic weapons.

These men having no training in the weapon system, no clearances and are the worst educated airmen on active duty. However they are in constant radio contract with their dispatcher and through them with the MCCCs in the LCC, a hundred feet or so below ground and via patch with Job Control back on the base, about 100 miles, in this case to the westsouthwest.

These men reported seeing a flying saucer" on the silo cover, inside the silo and smaller objects around it, that appeared to be lights floating in the air.

The larger saucer was sitting on the silo door, a massive 30 ton concret hatch, on a short rail track. It was thus well inside the fence and entirely unauthorized.

As this was an armed and targeted missile, aimed at the Soviet Union, this flagrant breach of security was taken very seriously by all concerned.

Minutes after these objects were spotted, the call came excitedly to our quarters, so I arrived within 30 minutes of the initial OZ security violation. I actually arrived before the AP s arrived at the silo in question.

By the time of my arrival, at JC, the JC Commander had taken it upon himself to send the nearest team, then at work on the missiles. This team turned out to be about 30 or 40 minutes away.

Now this was entirely out of the book.

No open silo, as the one left was, was ever to be left without authorized personnel on it, since it could be launched.

Nevertheless, the need to have a qualified observer at the site being probed by the UFOs, obviously overrode the Technical Orders of Operation.

So the EMT team, that was nearby, was dispatched from their silo, which was undergoing some form of routine maintenance. I believe this was an EMT team consisting of 2 Analysts and an Air Policeman.

A command decision, backed by SAC in Offutt AFB, lay behind this unusual order.

Thus one AP and one analyst were sent to the silo in question, leaving the open silo, and its deadly missile, in the hands of one man, hence the security breach.

I remember not only overhearing the radio conversation as these Airmen approached the silo, a conversation that confirmed what the other AP s had seen:

Holy shit, there is a fu**in' saucer on that silo.

But I talked with this man, a day or so later, myself. He had been ordered to say nothing to anyone about what he saw. But did confirm these orders and the facts as I knew them to be. An analyst, he, like me, had spent an year in technical school, so we were close.

During this same period, our helicopters were roused and dispatched. Arriving as the UFO was rising up out of the silo. They gave chase, but were unable to close, as the objects accelerated towards the northnortheast.

The sightings continued for about a week with the same pattern. First an Outer Zone beach and then an Inter Zone.

We had no smaller aircraft, being a tanker and bomber wing, but evidently were able to call in a nearby KC-135, a 707 tanker, that must have been on rotation nearby.

I myself overheard the conversation between the pilots and base operations confirming the sighting of the or a UFO in the area. Said UFO followed the KC 135 back towards the base, with a strong radar image, but no visual image.

The plane was required to fly by so it could be observed and nothing was seen where the radar said something was.

He was loaded into the staff car and driven away under escort to the photo lab. I did not speak with him, but clearly saw his photographic gear.

I did not see these UFOs. I did, however, speak directly with airmen who had seen them and indeed were seeing them.

During that week there were numerous reports, so numerous that the Air Force announced that B-58 bombers were flying over on maneuvers. But, of course, whatever landed on Hotel 6 wasn't a B-52.

I am fully confident that during the summer of 1966 UFOs visited our Minuteman silos in the Dakotas, landed upon and penetrated those silos. We were powerless to stop them and the USAF covered up this entire chapter.

I suspect it is still classified and that I should not be talking about these events.

I vaguely remember being instructed not to speak about these matters and was, of course, operating under very tight above Top Secret security clearances.

I come forth because the missiles are no longer on active duty, the silos decommissioned and the time long past. I can think of no reason why these events should be covered up in the name or color of national security.

Something major happened that summer. And it happened to nuclear weapon systems that were armed and on duty at the time.