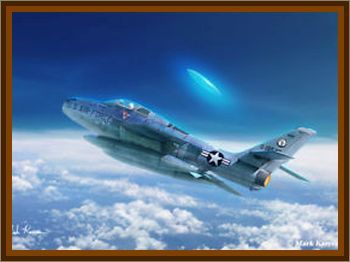 This isn't one of my favorite stories on our site, Some things just didn't add up. The first being who is the I/Me person? When I put stories up like this, to me it seems like misrepresentation, like in the case of this story was telling it to me. I don't agree with that thought. FYI..the I/Me isn't my wife or myself.

A few minutes before, a wire had come in carrying a priority just under that reserved for flashing the word the U.S. has been attacked. Max had been called over to ATIC by the OD to see the report, and he thought that I should see it. I was a little hesitant to get dressed and go out to the base, so I asked Max what he thought about the report. His classic answer will go down in UFO history:

Captain, Max said in his slow, pure Louisiana drawl, you know that for a year I've read every flying saucer report that's come in and that I never really believed in the things.

Then he hesitated and added, so fast that I could hardly understand him:

But you should read this wire.

The speed with which he uttered this last statement was in itself enough to convince me. When Max talked fast, something was important.

A half hour later I was at ATIC, just in time to get a call from the Pentagon. Someone else had gotten out of bed to read his copy of the wire.

I used the emergency orders that I always kept in my desk and caught the first airliner out of Dayton to Rapid City, SD. I didn't call the 4602nd because I wanted to investigate this one personally. I talked to everyone involved in the incident and pieced together an amazing story.

Shortly after dark on the night of the 12th, the Air Defense Command radar station at Ellsworth AFB, just east of Rapid City, had received a call from the local Ground Observer Corps filter center. A lady spotter at Black Hawk, about 10 miles west of Ellsworth, had reported an extremely bright light low on the horizon, off to the northeast. The radar had been scanning an area to the west, working a jet fighter in some practice patrols, but when they got the report they moved the sector scan to the northeast quadrant There was a target exactly where the lady reported the light to be. The warrant officer who was the duty controller for the night, told me that he'd studied the target for several minutes. He knew how weather could affect radar but this target was well defined, solid, and bright. It seemed to be moving, but very slowly.

He called for an altitude reading, and the man on the height finding radar checked his scope. He also had the target, it was at 16.000'.

The warrant officer picked up the phone and asked the filter center to connect him with the spotter. They did, and ihe two people compared notes on the UFO's position for several minutes. But right in the middle of a sentence the lady suddenly stopped and excitedly said:

It's starting to move, it's moving southwest toward Rapid.

The controller looked down at his scope and the target was beginning to pick up speed and move southwest. He yelled at two of his men to run outside and take a look. In a second or two one of them shouted back that they could both see a large bluish white light moving toward Rapid City. The controller looked down at his scope, the target was moving toward Rapid City. As all three parties watched the light and kept up a steady cross conversation of the description, the UFO swiftly made a wide sweep around Rapid City and returned to its original position in the sky.

A master sergeant who had seen and heard the happenings told me that in all his years of duty, combat radar operations in both Europe and Korea, he'd never been so completely awed by anything. When the warrant officer had yelled down at him and asked him what he thought they should do, he'd just stood there.

After all, he said, what in hell could we do, they're bigger than all of us.

But the warrant officer did do something. He called to the F-84 pilot he had on combat air patrol west of the base and told him to get ready for an intercept. He brought the pilot around south of the base and gave him a course correction that would take him right into the light, which was still at 16.000'.

Once it began to move, the UFO picked up speed fast and started to climb, heading north, but the F-84 was right on its tail. The pilot would notice that the light was getting brighter, and he'd call the controller to tell him about it. But the controller's answer would always be the same:

Roger, we can see it on the scope.

There was always a limit as to how near the jet could get, however.

The controller told me that it was just as if the UFO had some kind of an automatic warning radar linked to its power supply. When something got too close to it, it would automatically pick up speed and pull away. The separation distance always remained about 3 miles.

The chase continued on north out of sight of the lights of Rapid City and the base, into some very black night.

When the UFO and the F-84 got about 120 miles to the north, the pilot checked his fuel, he had to come back. And when I talked to him, he said he was damn glad that he was running out of fuel because being out over some mighty desolate country alone with a UFO can cause some worry.

Both the UFO and the F-84 had gone off the scope, but in a few minutes the jet was back on, heading for home. Then 10 or 15 miles behind it was the UFO target also coming back.

While the UFO and the F-84 were returning to the base, the F-84 was planning to land, the controller received a call from the jet interceptor squadron on the base. The alert pilots at the squadron had heard the conversations on their radio and didn't believe it.

Who's nuts up there?, was the comment that passed over the wire from the pilots to the radar people. There was an F-84 on the line ready to scramble, the man on the phone said, and one of the pilots, a World War II and Korean veteran, wanted to go up and see a flying saucer. The controller said:

In a minute or two the F-84 was airborne and the controller was working him toward the light. The pilot saw it right away and closed in. Again the light began to climb out, this time more toward the northeast. The pilot also began to climb, and before long the light, which at first had been about 30° above his horizontal line of sight, was now below him. He nosed the F-84 down to pick up speed, but it was the same old story, as soon as he'd get within 3 miles of the UFO, it would put on a burst of speed and stay out ahead.

Even though the pilot could see the light and hear the ground controller telling him that he was above it, and alternately gaining on it or dropping back, he still couldn't believe it, there must be a simple explanation. He turned off all of his lights, it wasn't a reflection from any of the airplane's lights because there it was. A reflection from a ground light, maybe. He rolled the airplane, the position of the light didn't change. A star, he picked out three bright stars near the light and watched carefully. The UFO moved in relation to the three stars. Well, he thought to himself, if it's a real object out there, my radar should pick it up too, so he flipped on his radar ranging gun sight. In a few seconds the red light on his sight blinked on, something real and solid was in front of him. Then he was scared. When I talked to him, he readily admitted that he'd been scared. He'd met MD 109's, FW 190's and ME 262's over Germany and he'd met MIG-15's over Korea but the large, bright, bluish white light had scared him. He asked the controller if he could break off the intercept

This time the light didn't come back.

When the UFO went off the scope, it was headed toward Fargo, ND, so the controller called the Fargo filter center.

Had they had any reports of unidentified lights? he asked. They hadn't.

But in a few minutes a call came back. Spotter posts on a southwest northeast line a few miles west of Fargo had reported a fast moving, bright bluish white light.

This was an unknown, the best..

The sighting was thoroughly investigated, and I could devote pages of detail on how we looked into every facet of the incident, but it will suffice to say that in every facet we looked into we saw nothing. Nothing but a big question mark asking what was it.