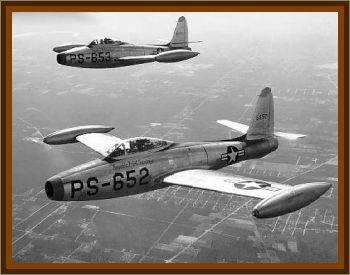 On August 5 and August 6, 1953 the US Military investigated a UFO incident in Bismarck, North Dakota. What has become known as the Ellsworth Case, and is one of the most significant radar visual cases in the annals of UFO sightings. The event was witnessed by almost 45 agitated citizens along with military Air Defense System personnel. The object was first sighted by Miss Kellian at 8:00 p.m. on August 5. The description was of a red glowing light making long sweeping movements.

The information was transmitted to the Bismarck, North Dakota, Air Defense Filter Center. Sometime later Sergeant Harry spotted the objects from the roof. He observed, paying close attention to the irregular movement, as it danced between telephone lines. Others on duty saw the moving light which would be visible in the night sky for approximately three hours. Sergeant Harry described his observance in the following manner:

It would remain stationary, then hop up several degrees very quickly, almost simultaneously. Another witness commented, It would stop, move to the left and then swerve down in a sort of slanting motion, repeating these maneuvers several times.

At midnight 3 additional objects appeared in the sky above Dakota. The employees of the Filter Center had a feeling like someone was watching them. Before they were seen in Bismarck, two F-84s had been vectored into the area over Blackhawk, South Dakota. The objects & jets were monitored on radar. One pilot established visual contact for 20-30 seconds. His description could be heard over the intercom, it's brighter than the brightest star I've ever seen. When the pilot gave chase the light inexplicably disappeared. Lieutenant Needham, the second pilot, spotted one of the objects at 15,000'. It was below him and to his right. The object moved spasmodically up and down. The colors changed from white to green. In pursuit Needham climbed to 26,000'. He changed course to 360°. After maintaining steady on 360° for a brief time, his radar lock-on-light on the A-4 gun sight came on and remained on. The object was ahead of him. It increased speed and moved rapidly ahead and up. The chase was being carried on the radarscope at the control room. Radar indicated that the UFO was staying 5-10 miles ahead of the F-84. Finally Lieutenant Needham gave up his pursuit and flew back to the Military base. The object continued on and was detected by the Filter Center in Bismarck.

At 1:09 a.m. an Air Force Globemaster C-24 flew over Bismarck. As the plane neared, the object closest to the plane appeared to emanate a signal by blinking red and green. This signaling was picked up by the other objects. An observer reflected about this, It was as if a wave passed from one to the other. The Air Force offered a number of possibilities as to the cause of the sightings. In the final synopsis the objects would continue on the records as unknowns.