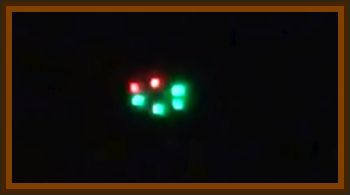 At first I didn’t wake her up but I could see the lights behind the trees which then rose above the trees and hovered in the air for a moment.

I could hear a message in my thoughts that my desire for proof of extraterrestrials had arrived and that I was not to tell anyone.

It was definitely telepathic communication and I asked silently if I could tell my woman and the reply was something like:

If you want to.

So I woke her up and asked her to look out the window and tell me what she could see.

She described exactly what I saw and then I made sure I wasn’t dreaming by several different methods, shaking my head, pinching myself, asking her if we were dreaming. I then asked her if she could hear the message coming mentally from the ship which by this time was landing very close to the house.

It’s telling us not to tell anyone and that we can come onto the ship.

That’s what I was perceiving also, so I jumped out of bed and started putting my clothes on as she put her robe on. I was out in the upstairs hall and headed down the stairs to the back door of the house when I heard her say she had to tell our roommate who was sleeping in her room.

I said don’t do it as I shot down to the first floor and out to the back yard. I saw the ship sitting there and there was an open door with a ramp coming out of it.

Meanwhile my girlfriend and roommate were headed downstairs but I was intent on getting onto the vehicle and not violating the trust of the beings who had sent the thoughts by telling more people.

There was a yellowish light coming from the interior and I could see a tiled wall and what appeared to be a tube filled with liquid at the center of the room. The next thing I remembered was standing back in the house near the back door. I rushed back outside and the UFO was lifting off into the air above the yard.

The women were entering the room from the upstairs by this time and they joined me outside. As I looked up following its movement high into the air, about 150', the object transformed itself into what appeared to be a U.S. Army Cargo plane, complete with a rumbling engine sound and proceeded away above the trees.

Our roommate said something to the effect that it was just a plane, and I could feel waves of mental energy attempting to block and confuse my mind into a doubtful state.

As we stood there in the yard I resolved not to let my memory be blanked out. We all ended up going back to bed and the next day my girlfriend said the whole thing was probably in our minds somehow, but I know it was physical/material/real time experience because I ran onto that ship with my jeans and a t-shirt on and had only underpants on when I found myself back in the house minutes or hours later.

What happened inside the ship I cannot recall but remember running up that ramp.