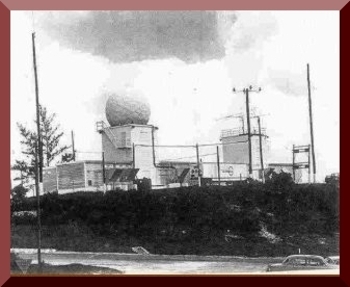 If the logs still exist, then look in the Navfac Eleuthera Base ones. Base shut down in 1979.

I was standing guard duty one night on a top secret base on the Island of Eleuthera in the Bahamas. I had very low level, but very slow moving craft come down island, turn and make an approach towards the gate shack that I was in.

It was slow moving and was only at a tree top height. It stopped directly above me and I filed a report to the Officer Of the day, but he would not believe me that it was there.

I logged my report in at 2:15 a.m. and stepped outside the shack, and looked up at it which seemed like a couple of minutes, but when I went back in the shack to sign this craft out it was 2:30 a.m. I was not sure as to what to make of this, so I mentened this to several people on the base.

A couple of days later, I was talking about this, and an officers wife heard me talking, and she said that she saw it sitting over the shack I was in, but instead of waking up her husband, she got afraid and went to bed.

I asked everyone who was on watch to look for anything unusual relating to this, and when I went on watch again it came back, but this time I had about 5 people there with me.

I guess the thing that bothers me the most is that I had 16 section duty, which means that, every 16th day I would stand duty, and it showed up only on my duty.

Well, after the 5th time it did not come back until I was sitting in the shack, and the hair on the back of my neck stood up, like someone was behind me, or watching me, so I walked to the top of the hill where I could see the other side of the island, and there it was cruising along the island at a high rate of speed, about what looked like about a couple of feet off the water.

I have had dreans on occasion of a green beam, and I feel I have an all knowing feeling/knowledge of how this craft is powered.

I have more or less kept this to myself, as people who have not experenced this, tend to make you feel like an ass when you bring it up.

PS; As I looked below the craft I saw was a tipical saucer type with the top dome showing a light that looked like a diamond that you would turn in the light of day. I have never seen one like it in all the articles and shows about them. I just remember the sound that it made which was like a low pitched sound of wind blowing through a tunnel.